You are here: Home>Places>Tuam Heritage and Nature Trail>07. Waterslade House 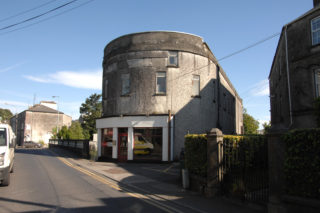 Waterslade House a townhouse built circa 1650 was remodelled in 1810 by the Burke family of Knocknagur, Tuam.[1] William Burke who was married in 1827 resided there for a time. Noteworthy sons of his were Augustus Burke who was a famous painter and Thomas Henry Burke, Undersecretary of State of Ireland who was murdered in the Phoenix Park, Dublin in 1882 by the ‘Invincibles’ and Lieutenant Colonel Theobald Burke 13th Baronet of Glinsk and Knocknagur.[2]

Doctor Prendergast was living in the house in 1839.[3] When Daniel O’Connell opened the National Bank at the site of the present Bank of Ireland on Dublin Road in 1844, he was entertained at Waterslade House. It was said but cannot be confirmed that there was a very big celebration and event to coincide with O’Connell’s visit to Tuam in that year with bands from all over the West of Ireland marching. Doctor Prendergast left the house to his son Richard Cuffe Prendergast and it was auctioned in 1876 and sold to James McDonnell who had a business on the Square at the site of the present AIB bank.[4]

Fred McDonagh, a solicitor from Dunmore, Co. Galway and nephew of James McDonnell became the owner in 1920. He passed it to his son Stephan. It was sold by auction to Doctor Midie Farrell on May 31st 1962.[5] He passed it to his sister Kathleen Farrell and Martin J. Farrell who had a pharmacy on the Square died there on April 17th 1982.[6]

The gates to the house stood originally at what is now the entrance to Waterslade Apartments. When the present day front door was installed at the back of the house, new gates were installed located where the inner relief road starts at Foster Place. These came from Castle Ellen House near Athenry which was also owned by James McDonnell.[7] Lord Edward Carson was reputed to have practiced his hurling skills against them as a boy. The gates were moved to their present location in 2010.[8]