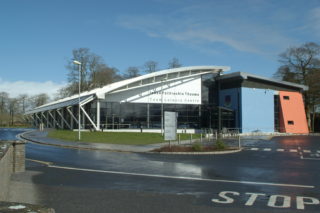 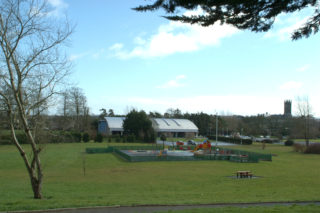 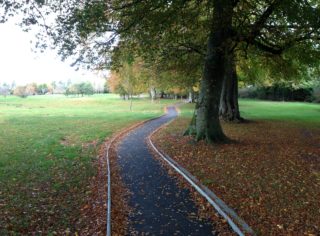 The design of the Palace Grounds Park is one the four thousand parks built throughout Britain and Ireland and popularised by Lancelot “Capability” Browne (1715-83) in the eighteenth century. It is situated to the northeast of the main Palace building. The design focused around a meadow surrounded by landscaped trees, i.e. using the natural material of the countryside retained and managed in an informal manner. The park was planted around 1760.[1]

By 1980 the park had fallen into some disrepair due to weather and neglect. The Community Council got to work and cleared away the wreckage and planted hundreds of new trees. The Council also turned the grass track that went around the perimeter of the meadow into one of cinder. The County Council later upgraded it to tarmac. Cross paths were also introduced and are in the process of further upgrading to asphalt and modified to greenway width. The meadow is a closely mowed area.

Today the park also hosts the Tuam Leisure Centre with a modern twenty-five metre swimming pool and full gym facilities. The Children’s Playground was enlarged and upgraded in 2014. The park and playground is maintained and overseen by a Community Employment Scheme sponsored by Galway County Council