You are here: Home>Places>Tuam Heritage and Nature Trail>32. Daly’s Hotel 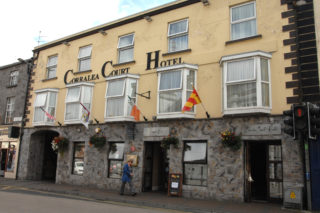 The hotel was built in 1832 and in 1894 became Guy’s Imperial Hotel. Today, it is the Corralea Court Hotel. Charles Stewart Parnell (1846-91) addressed a large crown from an upstairs window during his campaign in support of the Land League on his first visit.