You are here: Home>Places>Tuam Heritage and Nature Trail>21. The Palace (Restaurant) 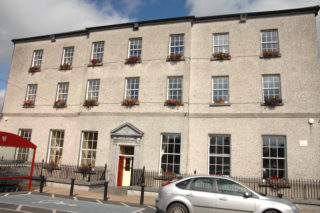 Built in 1720 by Church of Ireland Archbishop Synge and formerly the site of the ‘Wonderful Castle’ built by Ruairi O’Connor the Last High King of Ireland in 1164. The castle was acquired by the Archbishop in 1574 and used as his palace. It was repaired in 1647. A section of the bawn wall (outer enclosure) was used as the front wall of two public houses on Shop Street in 1839.[1] The site of the Chair of Tuam the only surviving part of the bawn wall and is part of a turret. The Palace was considered “old fashioned” by Daniel Beaufort in 1787.[2] Today the building operates as a restaurant and offices for Joe O’Toole Supervalu.

[2] Famous in his own right but also father of Francis, Rear Admiral of the Royal Navy and famous hydrographer who invented The Beaufort Scale still used today to describe the force of wind via the sea state