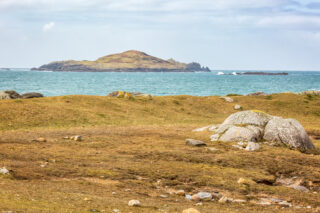 Name Books for the Parish of Omey

There was only 1 house in the townland in 1911 and it was a private dwelling and was constructed of stone, brick or or concrete walls with thatch, wood or other perishable materials for roofing. It was a 4th class house with 1 room and no windows.

Anthony (87) was the head of this household and he was married to Margaret (71) and they had been married for 49 years and in that time they had had 6 children but only 2 had survived. They were both born in Co. Galway and were Roman Catholic. They could speak both Irish and English and both could read only. Anthony was a retired farmer and Margaret was a retired farmer’s wife. The landholder was Mr Gooley Le Baron Henni [sic] (?).

Winifred Coyne – Application No. C/16 4359. Ref. No. Cen S/11/438. The application was received on 26th July 1916 with an address of The secy [sic] L.G.B. Edinburgh. Winifred’s parents were given as being Michael and Barbara Coyne (Lacey). The address’ given for the 1851 search were Cartoorbeg, Cloon, Gooreen, Gorcenatinny and Sturrakeen. All in the Parish of Omey, in the Barony of Ballynahinch, Co. Galway. The search was returned on 28th July 1916 with the words “Not Found”

Festus Walsh – Application No. C/20 10634. Ref. No. Cen S/11/439. The application was received on 4th Dec 1920 with an address at that time of Pollaugh, Keel, Westport. Festus’ parents were Tom and Bridget Walsh or Welsh (Pole). The address’ given for the 1851 search were Cartoorbeg, Cloon, Gooreen, Gorcenatinny and Sturrakeen. All in the Parish of Omey, in the Barony of Ballynahinch, Co. Galway. The search was returned on the 4th Dec 1920 with the words “Thos and Biddy Walsh married 1836.No return of Festus”

Thomas Eyre was the owner of this land in Gooreen and he leased 131 acres, 3 roods and 6 perches of land to Brazil P. Madden for £10. Brazil P. Madden in turn leased houses to the following: Patrick Toole. Thomas Walsh, Francis Toole, Honoria Powell, Michael Faherty, Michael Coosey [sic], Michael Cusack, John Toole, Felix Toole, John Whelan, Patrick Whelan Jun., Martin Higgins and Anthony Faherty for which each of them paid 5s annually. There were also 13 acres, 3 roods and 11 perches of water in the townland.

The 1670 Down Survey names for this area were Towerskehin and Loghanna. The 1641 owner was Edmund O’Flaharty, a Catholic and in 1670 the owner was Thomas Cunny, a Protestant.