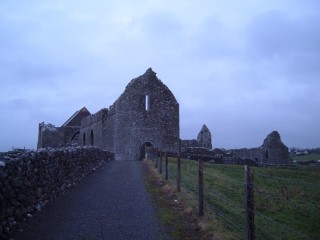 ABBEYKNOCKMOY, a parish, in the barony of TYAQUIN, county of GALWAY, and province of CONNAUGHT, 7 miles (S. E.) from Tuam, on the road from Newtownbellew to Galway; containing 2866 inhabitants. This place derives its name from the abbey of Knockmoy, called by some writers Cnoc Mugha, signifying in the Irish language “the Hill of Slaughter,” and by others Monasterium de Colle Victoriae. It was founded here, in 1189, by Cathol O’Connor, surnamed Croove-Dearg, or “the Red Hand,” King of Connaught, in fulfilment of a vow made by him previously to a battle with the English forces under Almeric de St. Lawrence, in which he obtained the victory; and was occupied by Cistertian monks from the abbey of Boyle. In 1620, its site and extensive possessions were granted by Jas. I. to Valentine Blake, Esq., and are now the property of Francis Blake Forster, Esq., of Ashfield. Near the summit of Knockroe hill is a subterraneous river, or stream, which was discovered some years since by the late Mr. Browne, of Moyne; and an opening having been made, it now supplies the neighbourhood with water: near the top of this hill are several limestone caverns. There are about 500 acres of bog in the parish.

The gentlemen’s seats are Moyne, the residence of M. J. Browne, Esq., a handsome mansion pleasantly situated in a fine demesne; Newtown, of Jas. Kelly, Esq.; and the Abbey, belonging to F. B. Forster, Esq. The intended railway from Dublin to the western coast is proposed to terminate here, with branches to Galway, Tuam, and the county of Mayo. Fairs are held on June 24th, Aug. 21st, and Nov. 1st. There is a constabulary police station at Moyne; and petty sessions are also held there. The parish is in the diocese of Tuam, and is a rectory and vicarage, forming part of the union of Killereran: the tithes amount to £220, In the R. C. divisions it is the head of a union or district, comprising also the parish of Monivae, and containing a chapel in each, situated at Abbey and Rye Hill; the former is a neat edifice with a steeple, recently erected on an eminence. At Briarsfield is a school, in which 70 boys and 43 girls are instructed. There are some very interesting remains of the ancient abbey, which show it to have been extensive in its dimensions and elegant in its design: several capitals of pillars beautifully sculptured lie scattered about the churchyard; the chancel is vaulted with stone, and on the north wall is the tomb of the founder, ornamented with some rude paintings in fresco, which, from some inscriptions on the walls, still legible, appear to be the work of the 13th century; they are partly defaced, and are rapidly going to decay.