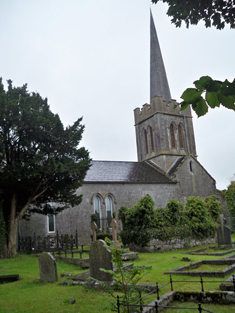 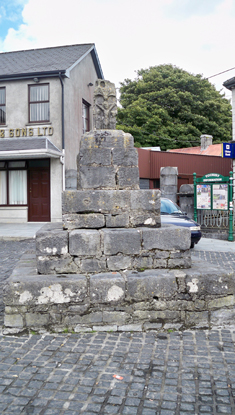 ATHENRY, an incorporated market and post-town, and a parish, partly in the baronies of CLARE, DUNKELLIN, KILCONNELL, and TYAQUIN, but chiefly in the barony of ATHENRY, county of GALWAY, and province of CONNAUGHT, 11 miles (E.) from Galway, and 95 ½ (W. by S.) from Dublin; containing 12,185 inhabitants, of which number, 1319 are in the town, which is wholly within the barony of Athenry. This place, anciently called Athnere, is said to have derived its name from Ath-na-Riagh, “the King’s ford,” or “the abode of a King.” Sir James Ware considers it to have been the chief town of the Anteri, who, acording to Ptolemy, were the ancient inhabitants of this part of the country. It was the first town established by the De Burgos and Berminghams, the Anglo-Norman invaders of Connaught, and at a remote period was surrounded with walls and became a place of importance. In the reign of John, Meyler de Bermingham granted a site of land here for the foundation of a Dominican monastery, and contributed towards the erection of the buildings, which were completed in 1261.

The monks obtained licence from the Pope

Florence O’Flin, Archbishop of Tuam, and the Earls of Ulster and many others were munificent benefactors to this establishment, which became very extensive and wealthy, and the chief burial-place of the Earls of Ulster and all the principal families of this part of Ireland. Indulgences for the benefit of the monastery were granted by the Pope in 1400, and in 1423 its church was burned down; in 1427, some of the monks obtained licence from the Pope to found two subordinate establishments; and in 1445 Pope Eugene IV. renewed the bull of Pope Martin for repairing the church, at which time there were 30 brethren in the monastery. A Franciscan friary was founded here by Thomas, Earl of Kildare, in 1464, and chapels were successively erected by his wife, the Earl of Desmond, and O’Tully.

Destroyed the few houses that had recently been built

In 1577, the two sons of the Earl of Clanricarde, called the “Mac-an-Earlas,” renouncing the submission which they had recently made to Queen Elizabeth, assembled their partisans in considerable force and sacked the town, destroyed the few houses that had recently been built, set fire to the new gates, and drove away the workmen employed in repairing the fortifications and in erecting other buildings, which had been undertaken by the chief governor, Sir Henry Sidney. From this period the town remained in a deserted condition till 1584, when Robert Foyle, John Browne, and other of its former inhabitants petitioned the queen’s council in England for such encouragement as would enable them to bring over English artisans and tradesmen to settle in the town, to rebuild and improve it, and to support a sufficient force for its future protection. The queen, in 1585, directed the lord-deputy to grant their request forthwith; and although no record exists of any such grant having passed the seal, several buildings were erected and numerous improvements were made.

In 1644 the Dominican establishment was revived

In 1596 the northern Irish invested the town, burned the gates, and forced an entrance; but they were repulsed in an attack on the castle, which was bravely defended, and having failed in an attempt to scale the battlements, they took possession of all the wall towers, and made prisoners of the inhabitants who guarded them; they afterwards set fire to the town, which, with the exception only of the castle, the abbey, and the church, was again reduced to ashes, and from this time seems to have been entirely neglected except by its immediate proprietors. In 1644 the Dominican establishment was revived and converted into a university; and in 1662 a writ of privy seal was issued on behalf of the inhabitants; but the town, which formerly held the second rank in the county, never recovered its ancient importance.

It is situated on the road from Oranmore to Monivae, and also from Loughrea to Tuam, and contains about 250 houses. The market, with a fair in October, was granted to Sir William Parsons, Bart., in 1629, and is on Friday, but is only indifferently attended; and fairs for sheep and cattle are held on May 5th, July 2nd, and Oct. 20th, of which that in July is the largest. A constabulary police force is stationed here. The borough is very ancient and probably exists by prescription. From a murage grant made to the “bailiffs and honest men of Athenry,” in the 4th of Edw. II. (1310), it would appear that a corporation previously existed; and writs of the first and some subsequent years of the reign of Rich. II. shew that it then returned representatives to parliament.

Forfeited during the civil dissensions

Queen Elizabeth, by letters patent dated at Greenwich in the 16th of her reign, granted to the portreeve and burgesses divers extensive privileges, and in the same year gave them the site and precincts of the Dominican monastery. In 1578 she conferred upon them various rectories and tithes; but all these privileges and possessions appear to have become forfeited during the civil dissensions which soon afterwards ensued, as Charles II., by his letters under the privy seal in 1662, after reciting the petition of “the ancient inhabitants, natives, and freemen of the old corporation of Athenry,” and other particulars referring to the borough, ordered that they should be forthwith reinvested with the said town and corporation, with all their rights, interests, and estates, and all privileges and immunities, excepting such inhabitants as had been disloyal and disobedient to his government.

A charter was granted in the 4th of James II., on a seizure of the franchises, but it does not appear to have been accepted or acted upon. The grant of Elizabeth is that under which the borough is governed: the corporation is styled “the Portreeve, Burgesses, and Freemen of the Corporation of the Town and Liberties of Athenry,” and consists of a portreeve and an unlimited number of burgesses and freemen: the above grant empowers them to appoint a common clerk and “all such other necessary servants as Trim used,” but the only inferior officers are a serjeant-at-mace, craner, pound-keeper, two appraisers, and a bellman, who are appointed by the portreeve. The portreeve is annually elected on the 14th of Sept. by the portreeve and burgesses, from three burgesses nominated on the preceding day by the same body, and is sworn in on the 29th: the burgesses are nominated on one day, elected on the next, and sworn on the 29th of Sept., and are now about twenty in number.

The town or portreeve’s court is held for all pleas, real and personal

The borough returned two members to the Irish parliament till the Union, who were elected by the portreeve and burgesses; the £15,000 awarded as compensation for the abolition of its franchise was paid to the trustees of the marriage settlement of Theophilus Blakeney, Esq. The limits of the borough comprehend the town and a surrounding agricultural district, called “the liberties.” The portreeve, who has power to appoint a deputy, is a justice of the peace within the borough and its liberties, clerk of the market, and sole judge in the borough court. The town or portreeve’s court is held for all pleas, real and personal, to an unlimited amount, as often as business requires, which of late has been but seldom, and generally on a Monday, not in any fixed court-house or place, but in different parts of the town; the ordinary process is by attachment against the debtor’s goods, on affidavit made by the plaintiff. Petty sessions are held in the town every Friday, at which three of the county magistrates usually attend.

The parish comprises 1954 statute acres, as applotted under the tithe act: the system of agriculture is somewhat improved; there is a considerable extent of unreclaimed bog. A coal-pit was opened some years since at Castle Lambert, and a considerable quantity of coal was found, but it was soon discontinued; the present proprietor, however, contemplates reopening it. The principal seats are Castle Lambert, that of W. Lambert, Esq., and Athenry House, the property of J. Lopdell, Esq. The living is a rectory and vicarage, in the diocese of Tuam; the rectory is partly appropriate to the prebend of Taghsaxon, but is principally consolidated with the vicarage (to which are united the chapelries of Abbert and Dunmacloughy), and in the patronage of the Crown for two turns, and the Bishop for one: the tithes amount to £1075, of which £7. 10. is payable to the prebendary, and £1067. 10. to the incumbent.

The ruins of the Dominican monastery

The church is a very neat edifice, built about the year 1828, by aid of a gift of £1500 from the late Board of First Fruits; and there is also a church at Monivae, served by a perpetual curate. There is neither glebe nor glebe-house. The R. C. parish is co-extensive with that of the Established Church; the chapel is a plain slated building in the town. In addition to the parochial school, in which about 55 boys and 35 girls are taught, there are four private pay schools, in which are about 240 children. There is also at Monivae a school of about 30 boys and 30 girls; and at Monivae and Newcastle are two private schools, in which are about 70 boys and 40 girls. Some remains exist of the ancient town walls and of one of the gates. The ruins of the Dominican monastery evince its ancient extent and grandeur; the tower of the church still remains, and the east window is of good design. On Mr. Lopdell’s estate is a chalybeate spring, which is much resorted to. Athenry formerly gave the title of Baron to the family of Bermingham, and was the premier barony of Ireland, being created in 1178; this title is now claimed by Edmund Bermingham, Esq., of Dalgan, and also by — St. George, Esq., of Tyrone, in the county of Galway, and the matter is under investigation by the House of Peers.