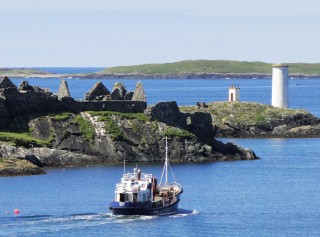 INNISBOFFIN, or ENNISBOFFIN, an island and parish, in the barony of MURRISK, county of MAYO, and province of CONNAUGHT, 26 miles (S. W.) from Westport, opposite the entrance to Ballinakill harbour; containing 1462 inhabitants. It is also called Inishbofin, and Boffin or Bophin island; is separated by a narrow channel from Innishark, or Sark island; and is the property of the Marquess of Sligo. An abbey was founded here by St. Colman, in 667, of which no mention is made by ecclesiastical writers after the tenth century. A castle was erected here by Cromwell, which was held for James II. by Colonel O’Riordan, who surrendered it to King William’s troops after the capitulation of Galway. It was built for the protection of the fishery, which was then extensively carried on here, against the Dutch. The harbour is situated in the centre of the fisheries, and will safely accommodate more than 100 vessels of 150 tons. The sea in its vicinity abounds with spermaceti and Greenland whales, sun fish, herrings, and many other kinds of fish. The parish is in the diocese of Tuam: the vicarage forms part of the union of Ballynakill; the rectory is impropriate in the Marquess of Clanricarde. The tithes amount to £9. 12. In the R. C. divisions also it is part of the union or district of Ballynakill, and has a chapel. About 80 children are educated in two private schools.