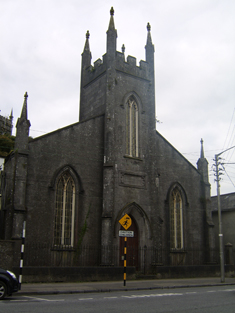 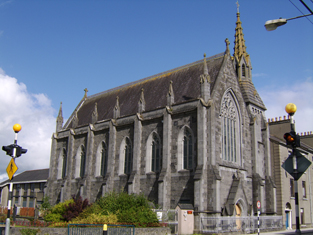 A Topographical Dictionary of Ireland, by Samuel  Lewis, 1837

BALLINASLOE, a market and post-town, partly in the parish of CREAGH, barony of MOYCARNON, county of ROSCOMMON, but chiefly in the parish of KILCLOONY, barony of CLONMACNOON, county of GALWAY, and province of CONNAUGHT, 12 miles (W. by S.) from Athlone, and 71 ¾ miles (W. by S.) from Dublin, on the road to Galway; containing 4615 inhabitants. This town is situated on the river Suck, which divides it into two unequal parts, of which the larger is in the county of Galway. It appears to have arisen under the protection of its castle, which in the reign of Elizabeth was one of the strongest fortresses in Connaught, and the ruins of which are situated on the Roscommon side of the river, and is now one of the most flourishing towns in the south and west of Ireland. In 1831 it comprised 632 houses, nearly all slated, of which 265 were built during the ten years preceding. The two portions are connected by a line of two bridges and causeways crossing some small islands, and about 500 yards in length, in which are 16 arches. Here are three tanyards, a flour and three oatmeal-mills, a manufactory for felt hats, a coach-manufactory, two breweries, and a large establishment for curing bacon; and in the vicinity are some quarries of excellent limestone.

An extension of the Grand Canal has been formed within the last few years from Shannon harbour to this town, through the bogs on the south side of the river Suck, which not only affords a regular conveyance for passengers to Dublin and other places, but greatly facilitates the trade of the town. The Ballinasloe Horticultural Society for the province of Connaught was founded in 1833, under the patronage of the Earl of Clancarty, and holds its annual meetings on the first Monday in March; three public shows take place in the year, when prizes are awarded for the best specimens of various kinds of fruit, flowers, and vegetables. The annual meetings of an Agricultural Society are also held here in October. Garbally Park, in the immediate vicinity, is the seat of the Earl of Clancarty, the proprietor of the town: the mansion is situated in a well-wooded demesne, and was rebuilt in 1819; it contains a good collection of paintings, and the public are allowed free access both to the house and grounds.

Near the town, also, is Mackna, the seat of his lordship’s brother, the Hon. and Ven. Charles le Poer Trench, D.D., Archdeacon of Ardagh. The market is on Saturday, and is well supplied with corn. The celebrated fair of Ballinasloe is the greatest cattle mart in the kingdom; it is held on the Galway side of the river, from the 5th to the 9th of October. The black or horned cattle are exhibited in an extensive area set apart for the fair outside the town; and a plot of ground in Garbally Park is appropriated to the show of sheep on the day before the fair, when very extensive purchases are made, and those that remain unsold are driven to the fair green. Great quantities of wool were formerly sold, but the establishment of factors in Dublin and other large towns has altered the channel of this branch of trade. The number and variety of goods exhibited for sale render the fair a great resort for all classes of dealers. The number of sheep exhibited in 1835 was 61,632, of which 54,974 were sold; and of cattle, 7443, of which 6827 were sold. Fairs for live stock are also held on May 7th and July 4th; and on the 6th of July there is a large fair for wool, which has been lately revived, and lasts four days: the wool fairs formerly continued from two to five weeks. Petty sessions are held every Wednesday and Saturday in a courthouse attached to the bridewell, an old house not adapted either for confinement or security. This is the head-quarters of the Galway constabulary police; and a company of infantry, for whose accommodation there is a barrack for 56 men, and two companies of cavalry are occasionally stationed here.

The church of the union of Creagh occupies an elevated site in the town. In the R. C. divisions this place is the head of a union or district, comprising the parishes of Kilcloony and Creagh, and containing a chapel in each; that of Kilcloony is situated at the extremity of the market-square. There are places of worship for Primitive and Wesleyan Methodists. Three schools for boys and girls, one for girls only, and an infants’ school, are chiefly supported by the Earl of Clancarty, and from other sources, at an expense of about £150 per annum; and there is a national school for both sexes, under the patronage of the R. C. clergyman. The lunatic asylum for the province of Connaught, situated here, was opened in 1833, and is capable of accommodating 150 inmates; it is built of limestone, in the form of the letter X, with a handsome cupola, and the ground attached to it comprises 14 plantation acres enclosed by a wall; the entire expenditure, including cost of building and purchase of site and furniture, was £27,130. 4. 6. Here is also a dispensary, and a Benevolent Society has been formed. The remains of the castle consist of the outer walls only, enclosing a square area, with a round tower in one angle, which has been converted into a neat residence called Ivy Castle, the seat of J. T. Maher,Esq.; the most picturesque portion is a bridge across the fosse to a gateway. The townland of Dunlo, on which the Galway portion of the town is built, gives the inferior title of Viscount to the Earl of Clancarty.—See KILCLOONY and CREAGH.