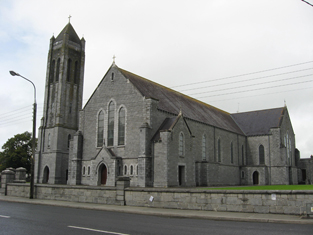 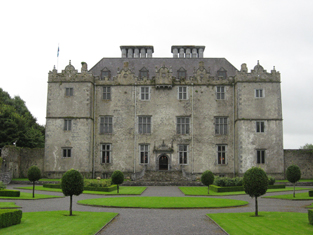 PORTUMNA, a market and post-town, in the parish of LICKMOLASSY, barony of LONGFORD, county of GALWAY, and province of CONNAUGHT, 14 miles (S. E.) from Loughrea, and 78 (W. by S.) from Dublin; containing 1122 inhabitants. This place was granted by Henry III., about the year 1226, to Richard de Burgo, by whom a castle was soon afterwards erected, of which the ruins may still be traced. The manor descended by marriage with Elizabeth, daughter of William de Burgo, Earl of Ulster, to Lionel, Duke of Clarence, from whom it passed to the Mortimer family, and subsequently to the Earl of Clanricarde, to whom it was confirmed, in 1610, together with the castle, monastery, fair and markets. The monks of the Cistertian abbey of Dunbrody had for a long time a chapel here, which was dedicated to St. Peter and St. Paul, and which, on their abandonment of it, was given by O’Madden, chief of the country, to friars of the Dominican order, who established a monastery here and a church dedicated to the Blessed Virgin.

In 1634, the Earl of Strafford held a council in the castle of this place, in order to establish the King’s title to the estates of Connaught, which being negatived by the jury empannelled for that purpose, the Earl placed both the jury and the sheriff under arrest and sent them prisoners to Dublin. The Earl of Clanricarde died in 1636, and was succeeded by Ulic, the fifth Earl of that family, who, on the breaking out of the war in 1641, fortified his castle and took every precaution to secure the peace of the county. When appointed Lord-Deputy of Ireland, after the departure of the Marquess of Ormonde, in 1650, he made this castle his principal residence, which, in 1659, was besieged by General Ludlow. In the war of the Revolution, the castle was garrisoned by the adherents of James II, but surrendered to Brigadier-General Eppinger, who had been sent by William with a force of 1200 horse and dragoons to reduce it.

The town is beautifully situated on the river Shannon, which here divides into two channels, forming an island, through the centre of which the line of separation, between the counties of Galway and Tipperary passes; it contains about 190 houses, of which the greater number are well built and covered with slate. The wooden bridge over the Shannon, built in 1796, by Mr. Cox, the American architect, is 766 feet in length, 391 feet from the Galway shore to the island in the river, and 375 feet thence to the Tipperary shore. The Galway part was destroyed by a great flood in 1814, but was rebuilt and the whole repaired in 1818, under the superintendence of the late Mr. Alex. Nimmo; it is now in a very dilapidated condition, to the great injury of the trade of the town, but it is about to be rebuilt; for which purpose a plan has been submitted to the Board of Works by Mr. Rhodes, which includes a swivel bridge of 40 feet span, to allow vessels navigating the Shannon to pass without lowering their masts; this is the only bridge between Munster and Connaught from Banagher to Killaloe, a distance of 37 miles. The chief trade is in corn, great quantities of which are sent in from the county of Galway, and since the improved navigation of the river by steam-vessels, it has very much increased; there are some large flour-mills and an extensive brewery.

The market is on Saturday, and is abundantly supplied with grain and provisions of all kinds: the average quantity of beef slaughtered for the weekly market is from 12 to 15 cwt., and of mutton, from 18 to 20 stone of 14lb. each Fairs are held on Feb. 15th, May 6th, Aug. 15th, Oct. 17th, and Nov. 15th, at which great numbers of pigs are purchased for the Limerick and Dublin markets.

This is the station at which passengers from Dublin to Limerick and the south of Ireland are transferred to the larger steam-vessels navigating the Shannon; and the residence of the chief constable of police for the barony of Longford. Petty sessions are held on alternate Mondays. Portumna Castle, the seat of the Marquess of Clanricarde, a noble structure in the Elizabethan style, and probably erected during that reign, was destroyed by an accidental fire in 1826; the walls only remain, and the offices have been fitted up as a temporary residence for the Countess Dowager. The remains of the ancient castle built by De Burgo, which was situated close to the river, were taken down a few years since. The parish church, a handsome structure of hewn limestone, with a spire, is situated in the town; it was rebuilt in 1832, at an expense of £1500, advanced on loan by the late Board of First Fruits.

The R. C. chapel, built in 1826, at an expense of £1200, is an elegant cruciform building in an enclosed square of an acre of ground, given by the Marquess of Clanricarde for a site for the building and a burial-ground: there is also a national school. There are considerable remains of the Dominican friary, the walls of which are in a tolerably perfect state; the church was cruciform and of elegant design; three of the arches which supported the tower are still entire, and several of the windows, particularly the east window of the choir, are enriched with tracery; the ruins are partly concealed by trees, and intertwined with ivy, and from their retired situation have a very interesting appearance. The tenants of the Marquess of Clanricarde in this neighbourhood, who have their land on reasonable terms, and are in comfortable circumstances, testify a growing taste for improving the cultivation of their farms.