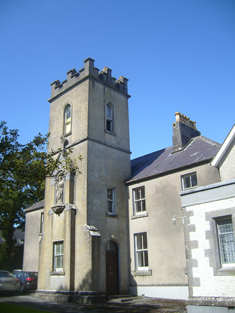 KINVARRA, a market, post, and sea-port town, and a parish, in the barony of KILTARTAN, county of GALWAY, and province of CONNAUGHT, 7 miles (N. W.) from Gort, on the bay of Kinvarra, which is within the bay of Galway; containing 4610 inhabitants, of which number, 824 are in the town. About the reign of Henry VIII., Rory More Darag O’Shaughnessy took the castle of Doon from Flan Killikelly, totally demolished it, and erected one near its site, which he named Doongorey. In 1642 it became the property of Thomas Taylor, who encircled it with a strong bawn or wall, and it is now in a good state of preservation. On the 1st of November, 1755, the day of the earthquake at Lisbon, a castle on the western boundary of the parish, which had formerly belonged to the O’Heynes, was destroyed to its foundation and a portion of it swallowed up; and at the same time the chimneys and battlements of Cahirglissane rocked and then fell into a chasm, which was formed by rending the rock to the depth of several fathoms.

The parish comprises 6114 statute acres, and is moderately well cultivated, producing excellent wheat; sea-weed is used as a manure, and limestone is abundant. Fresh water is scarce, but attempts are being made to obtain a larger supply. The town, in 1831, contained 140 houses, but has greatly increased since that time: it has a sub-post office to Ardrahan, and is a constabulary police station. The market is on Wednesdays and Fridays, and great quantities of corn are sold; fairs are held on May 18th and Oct. 17th, principally for the sale of sheep. A quay, about 50 yards long, was built here in 1773 by the late J. Ffrench, Esq., (great-grandfather of the present Baron de Basterot) which was lengthened and raised in 1807, and such an addition made to it in 1808 as converted it into a kind of dock. At high tide there is 12 feet of water at the pier, which is then accessible to vessels of 150 tons’ burden. Sea-weed to the value of £20,000 is landed here during the spring, which is brought in boats, of which from 60 to 100 sometimes arrive in one tide. It is intended to establish a steam vessel to ply regularly between this place and Galway. A canal hence to the river Fergus would greatly benefit the intervening country, by facilitating the importation of sea-weed, sea-sand, and turf, and the exportation of corn.

The principal seats are Thorn Hill, the residence of the R. C. bishop of Kilmacduagh; Northampton, of J. Mahon, Esq.; and Sea Mount, of Captain Butler. The parish is a prebend, rectory, and vicarage, in the diocese of Kilmacduagh; the rectory is appropriate to the see, and the prebend partly to the vicars choral of Christ-Church, Dublin, and the benefice of Ardrahan; the vicarage forms part of the union of Kilcolgan.

In the R. C. divisions it is the head of a union or district, comprising the parishes of Kinvarra, Duras, and Killina, and has a large chapel, erected in 1816 at an expense of £2000, on land given by the Baron de Basterot, with a neatly planted burial-ground; there is also a chapel at Duras Park, erected at the expense of P. M. Lynch, Esq. It is the benefice and residence of the R. C. bishop of Kilmacduagh and Kilfenora. There are six private schools, in which about 330 children are educated; and a large public school is about to be erected in the town, on a site given by the Baron de Basterot. There are some remains of the old church, which was for ages the burial-place of the O’Haynes and Magraths, no others being allowed to be interred within its walls. Near the shore are two extensive subterraneous caverns. A castle stood near the pier, but its materials have been used in building.