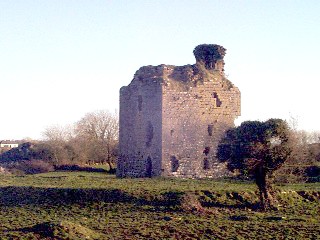 Notice: Corofin, co. Galway is not listed in Lewis, 1837. It is listed under Kilmoylan.

KILMOYLAN, a parish, in the barony of CLARE, county of GALWAY, and province of CONNAUGHT, 5 ¾ miles (S.) from Tuam, on the road from Mount-Bellew to Galway; containing 1788 inhabitants. This parish comprises the villages of Anbally and Doncanamore, near the former of which are the ruins of Anbally castle; there are also within its limits the remains of the castles of Tavanagh and Curofin.

The principal seats are Curofin, that of Pierce Blake, Esq., and Armagh, of J. Bodkin, Esq. It is a vicarage, in the diocese of Tuam, forming part of the union of Moylough; the rectory constitutes the corps of the prebend of Kilmoylan in the cathedral of Tuam, and in the patronage of the Archbishop.

The tithes amount to £280, half payable to the prebendary and half to the vicar.