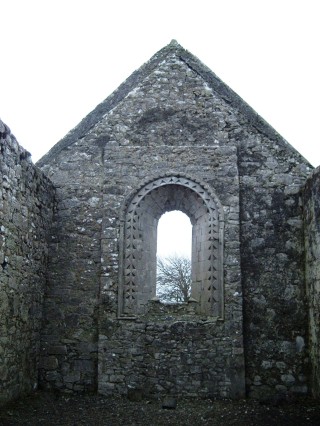 A Topographical Dictionary of Ireland,  by Samuel  Lewis, 1837

ANNAGHDOWN, or ENAGHDUNE, a parish, in the barony of CLARE, county of GALWAY, and province of CONNAUGHT, 7 ½ miles (N.) from Galway, on the road from Galway to Headford; containing 6093 inhabitants. This parish is bounded on the west by Lough Corrib, and comprises 16,508 statute acres, as applotted under the tithe act. It is a place of considerable antiquity, and was formerly the seat of an independent bishoprick, of which some notice will be found in the account of the archiepiscopal see of Tuam, with which it has for centuries been incorporated. St. Brendan of Clonfert built a nunnery here under the invocation of the Blessed Virgin, for his sister Briga, which, in 1195, was confirmed by Pope Celestine III., together with the town of Kelgel, to nuns of the Arroasian order: at the suppression it was granted to the Earl of Clanricarde. An abbey, dedicated to St. Mary, and called the abbey of St. Mary de portu patrum, was founded at an early period for White Premonstratensian canons; and here was a Franciscan friary, the head of a custody, to which the monasteries of Connaught and Ulster were subordinate. There was also another religious house, called the College of St. Brendan, in which four priests or vicars were supported, and which was not subjected to royal inquisition until the 28th of Elizabeth; and at Kilcoonagh, in the vicinity, was an abbey, which Tipraid, Prince of Hy Fiacria, granted to St. Columb, who placed over it St. Cuannan, from whom it derived its name.

The seats are Cregg Castle, that of Fras. Blake, Esq., and Waterdale, of Jas. Blake, Esq. The living is a vicarage, in the diocese of Tuam, to which those of Killascobe and Laccagh are episcopally united, and in the patronage of the Archbishop; the rectory is impropriate in John Kirwan, Esq. The tithes amount to £553. 16. 11 ¼., of which £138. 9. 3. is payable to the impropriator, and the remainder to the incumbent; and of the entire union, to £675. 9. 4 ¾, The church is a small neat building, for the erection of which the late Board of First Fruits gave £500, in 1798. The glebe-house was also built by aid of a gift of £350 and a loan of £450, in 1818, from the same Board: the glebe comprises 20 acres. The R. C. parish is coextensive with that of the Established Church: the chapel is at Corondola, and divine service is also regularly performed in a school-house at Woodpark. Schools at Annaghdown and Woodpark were each endowed with £100 late currency by the Rev. Redmond Hardagan, for the gratuitous instruction of 30 children in each; about 160 children are at present taught in these schools. There are also six hedge schools, in which are about 300 children; and a Sunday school is supported by the vicar.