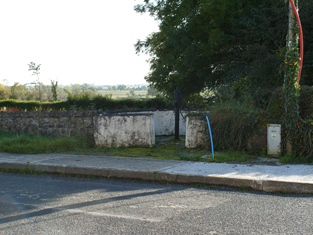 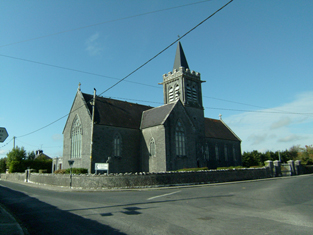 BALLYMACWARD, a parish, partly in the barony of TYAQUIN, and partly in that of KILCONNELL, county of GALWAY, and province of CONNAUGHT, 4 miles (S.) from Castle-Blakeney, on the road to Kilconnell; containing 4995 inhabitants. It comprises 8909 statute acres, as applotted under the tithe act; there is also a considerable tract of waste land and bog. The gentlemen’s seats are Mount Hazle, that of A. Browne, Esq.; Mount Bernard, of Bernard Browne, Esq.; Hampstead, of F. Davis, Esq.; Carrana, of J. Fitzsimons, Esq.; Crayon, of M. O’Kelly, Esq.; Greenhills, of S. Barrett, Esq.; Keave House, of W. Woods, Esq.; and Keave Lodge, of A. Lynch, Esq. Here is a station of the constabulary police. The living is a vicarage, in the diocese of Clonfert, united, with part of the rectory, to the rectory and vicarage of Clonkeen; the other portion of the rectory is partly appropriate to the see and partly to the deanery. The tithes amount to £279. 13. 10 ½., of which £55. 7. 8 ¼. is payable to the Ecclesiastical Commissioners, £16. 12. 3 ¾. to the dean, and £207. 13. 10 ¼. to the incumbent; and the entire tithes of the benefice amount to £267. 13. 10 ¼. The church is a neat building, erected in 1820. The R. C. union or district is co-extensive with that of the Established Church; there is a chapel in each parish.

The parochial school, in which are about 90 boys and 100 girls, is aided by annual donations from the Earl and Countess of Clancarty and the incumbent; and a plot of ground has been laid out for the erection of a national school, towards which the greater portion of the funds has been subscribed. There are also two private pay schools, in which are about 120 boys and 30 girls.