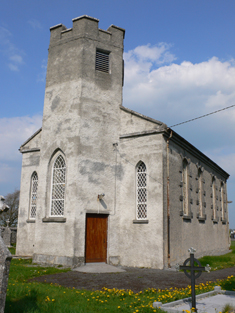 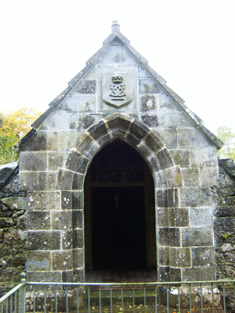 ARDRAHAN, a parish and post-town, partly in the barony of KILTARTAN and partly in that of LOUGHREA, but chiefly in the barony of DUNKELLIN, county of GALWAY, and province of CONNAUGHT, 15 miles (S. E. by E.) from Galway, and 97 (W. by S.) from Dublin, on the road from Limerick to Galway; containing 3805 inhabitants.. It comprises 12,950 statute acres, as applotted under the tithe act, a large portion of which is irreclaimable waste, though at the eastern extremity of the parish is a range of peat mountain, which is profitable as affording pasture for numerous black cattle. Flannel is rather extensively made by hand-spinning, for which a ready sale is found at Oranmore market, 12 miles distant. The principal residences are Cregclare, that of J. S. Lambert, Esq.; Castle Taylor, of Gen. Sir J. Taylor; Tillyra, of J. Martyn, Esq.; Castle Daly, of J. Daly, Esq.; and Rahenc, of J. O’Hara, Esq. A constabulary police force is stationed here, and petty sessions are held once a fortnight. The living is a vicarage with a portion of the rectory, and with the rectory of Beagh forms the union of Ardrahan, in the diocese of Kilmacduagh, and in the patronage of the Marquess of Clanricarde.

The tithes amount to £463, of which £84 is payable to the bishop, £23 to the archdeacon, and £356 to the incumbent; and the gross tithes of the benefice amount to £535. 6. 1 ½. The church was erected about 30 years since, by aid of a loan from the late Board of First Fruits, but was so indifferently built as to require a new roof, and has recently been repaired by the Ecclesiastical Commissioners. The glebe-house was also erected by a gift of £400 and a loan of £400 from the Board of First Fruits. The glebe comprises twelve acres. The R. C. parish is co-extensive with that of the Established Church, and there is a chapel at Labane; divine service is also performed occasionally by the parish priest at Tyllira castle. A national school is about to be established, and there are several pay schools in the parish. Here is a dispensary for Ardrahan and Gort. Along the mountain’s side are several mineral springs, and where there are strong indications of iron ore.