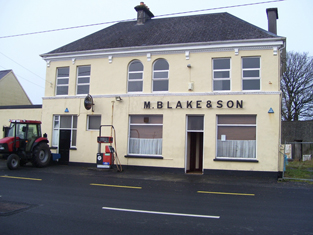 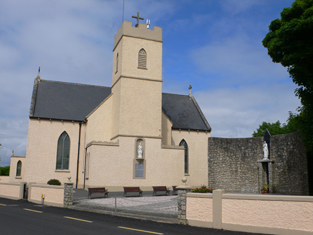 KILCONLY, a parish, in the barony of DUNMORE, county of GALWAY, and province of CONNAUGHT, 5 ½ miles (N. W.) from Tuam, on the road from that place to Castlebar; containing 2555 inhabitants. The parish comprises 4716 statute acres, as applotted under the tithe act: the land is good, with the exception of a large tract of reclaimable bog. Limestone of good quality is abundant; and there are meal and flour-mills on a large scale. It is a constabulary police station, and petty sessions are held at the station-house at Milburn every Friday. The principal seats are Castlegrove, the residence of E. Blake, Esq.; Ironpool, of Ulick Jennings, Esq.; Rockwell, of G. Lynch, Esq.; Newborough, of J. Blake, Esq.; Kilshanway, of Capt. Lewin; Belmont, of Blake Birmingham, Esq.; Ashgrove, of T. Birmingham, Esq.; and Blindwell, of M. Staunton Kirwan, Esq. This estate has been in the possession of the Kirwan, or O’Quirivawn, family for many centuries: in 1822, part of the land suddenly sank, and the abyss was filled with water. Within the demesne are the ruins of a fortress, consisting of a keep, enclosed within four strong walls, with a turret at each corner: the entrance arch is in the Norman style, and in good preservation. The parish is in the diocese of Tuam; the rectory is appropriate to the vicars choral of the cathedral, and the vicarage forms part of the union of Tuam, and is in the patronage of the Archbishop. The tithes amount to £144. 10. 6 ½., which is equally divided between the vicars choral and the incumbent. The church is a neat building, erected in 1830, at an expense of £1500. In the R. C. divisions it is united to Kilbannon, and a large chapel is in course of erection. About 130 children are educated in a public, and 80 in a private school.