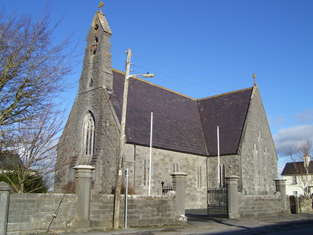 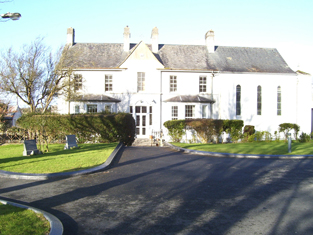 HEADRORD, a market and post-town, partly in the parish of KILKILVERY, but chiefly in that of KILLURSA, barony of CLARE, county of GALWAY, and province of CONNAUGHT, 16 miles (N.) from Galway, and 107 ¾ (W.) from Dublin; containing 1441 inhabitants. This is a neat and clean town, having been much improved by its proprietor, R. J. Mansergh St. George, Esq.; it has a considerable trade, and commands fine views of Lough Corrib, and the mountains of Joyces’ country and Mayo. It comprises 217 houses, is a chief constabulary police station, and has petty sessions on Mondays; here is also a dispensary. Bobbin lace, coarse linen, and flannel are made. The market is on Tuesday, and fairs are held on May 11th and Oct. 14th. Headford Castle is the residence of R. J. M. St. George, Esq.; it is a handsome modern building, erected on the ruins of the ancient castle; the extensive demesne, which is laid out with great taste, is entered from the town by a good gateway. Here is also Clydagh House, the seat of G. Staunton Lynch, Esq. In the neighbourhood are several raths; and between the town and the shores of Lough Corrib are the ruins of Ross abbey, partially covered with ivy. It was founded for Observantine Franciscans, in 1498, by Lord Granard, and a chapter of the order was held in it in 1509. At the suppression of religious houses it was granted to the Earl of Clanricarde. In 1604 it was repaired by the Catholics, and in 1812 the roof fell in; one of the windows is still perfect. Within this ruin is the burial-place of the Burke, Kirwan, Browne, and Lynch families. In 1828, silver coins of the reigns from Henry III. to William III., copper coins of James II. and his successor, military weapons and other relics were found near Headford Castle, and are now in the possession of Mr. Harrison.