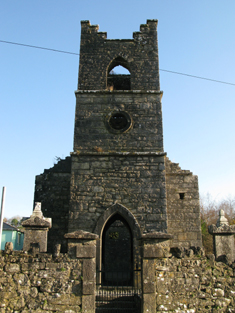 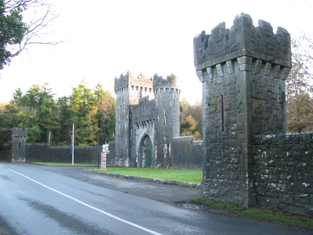 Notice: Most of Cong is in County Mayo but some of the civil parish in County Galway

CONG, a post-town and parish, partly in the barony of ROSS, county of GALWAY, but chiefly in that of KILMAINE, county of MAYO, and province of CONNAUGHT, 19 miles (S.) from Castlebar, and 121 (W.) from Dublin; containing 8378 inhabitants. This place, though now only an inconsiderable village, was formerly a town of some importance, and the ancient residence of the kings of Connaught. A monastery, dedicated to the Blessed Virgin, was founded here by St. Fechan, who died in 664; though by some writers its foundation is ascribed to Donald, son of Aed, nephew of Amirach, King of Ireland, who is said to have made St. Fechan its first abbot. Little further is recorded of its history till 1134, when a great part of the town was burnt and the abbey plundered by the people of Munster. Roderic O’Connor, the last native king of all Ireland, spent the last 15 years of his life in seclusion within this monastery, where he died on the 29th of November, 1198, in the 82nd year of his age; he was interred at Clonmacnois. In 1201 the town and monastery were plundered by William de Burgo, who repeated his ravages in 1204; and in 1310, the town was plundered by Hugh Breifneach. The family of De Burgo afterwards became munificent benefactors to the abbey, to which they gave ample endowments in land, and it continued to flourish till the dissolution. Queen Elizabeth granted part of its possessions to the Provost and Fellows of Trinity College, Dublin; and James I. granted a lease of the abbey to Sir John King, Knt., ancestor of the present Earl of Kingston.

The town is situated on an island formed by the several openings of a subterraneous river that flows from Lough Mask into Lough Corrib; the principal of these openings rises in a great body from a depth of 73 feet, forming a powerful eddy which turns two large mills, and the approaches are over three bridges. It consists of two streets of small houses, of which the greater number are thatched, and has a sub-post-office to Ballinrobe. There are two large mills, the property Mr. John Thompson, erected about 40 years since, and each grinding on an average 300 tons of wheat annually. Fairs are held at Funshinough in May and September; and petty sessions are held every Saturday alternately for Mayo and Galway.

The parish comprises 17,622 acres, as applotted under the tithe act, of which about 240 are woodland, 480 mountain and bog, and, with the exception of about one-fifth, which is waste, the remainder is good arable and pasture land, chiefly under tillage, and producing excellent crops; that which is in pasture, lying upon a substratum of limestone, feeds a large number of sheep and goats. Limestone is everywhere found, rising in many places above the surface; and there are quarries of the finest description of building stone, which is sent to most parts of the adjacent counties, for which Lough Corrib, navigable for 20 miles to Galway for boats of 10 tons’ burden, affords a facility of conveyance. The. gentlemen’s seats are Strand-Hill, the residence of T. Elwood, Esq.; Garracloone, of R. Blake, Esq.; Ballymagibbon, of J. Fynn, Esq.; Blake Hill, of Mrs. Blake; Ashford, of Lord Oranmore; Royal Rock, of the Rev. M. Waldron; Houndswood, of Martin D’Arcy, Esq.; and the glebe-house, of the Rev. E. L. Moore.

The living is a rectory and vicarage, in the diocese of Tuam, and in the patronage of the Archbishop: the rectory is partly impropriate in Sir R. A. O’Donel, Bart., as representative of the abbot of Cong, and partly appropriate to the prebend of Killabegs in the cathedral of Tuam. The tithes amount to £489. 4. ½., of which £18. 9. 2 ¾. is payable to the prebendary, and the remainder to the incumbent: the impropriate tithes are not under composition. The glebe-house was built by aid of a gift of £400 and a loan of £380 from the same Board, in 1817: the glebe comprises 25 ½ acres. The church, a neat edifice with a small square tower, and in good repair, was erected by aid of a loan of £640 from the late Board of First Fruits, in 1811.

The R. C. parish is co-extensive with that of the Established Church; the chapel is a handsome edifice, in the later English style, with a square tower surmounted with a cross. The parochial school is under the Tuam Diocesan Society, aided by an annual donation from the incumbent; a school at Ballymagibbon is supported by John Fynn, Esq.; one at Funshinough is aided by Martin D’Arcy, Esq.; and there is a national school at Carrokeel. About 430 children are instructed in these schools; and there are also four pay schools, in which are about 150 children; and a dispensary. There is an ancient cross in the centre of the town, and the ruins of several churches are still to be seen here. Spars of various colours are found, and the neighbourhood abounds with natural curiosities.

Lough Mask, which is on much higher ground than Lough Corrib, discharges its superfluous waters into the latter by subterraneous channels, which, from the openings in the limestone, may in several places be seen flowing at a great depth below the surface. The most remarkable of these openings is the Pigeon Hole, which is of great depth; a descent to it is formed by 68 steps, and at the bottom the water rushes with great violence and noise till it is again lost in the dark recesses of the cavern, which extends to a considerable distance; in the middle of the stream is a small eel weir. There are several other caverns in the limestone range, of which Kelly’s Cave and the Lady’s Buttery have their roofs fantastically encrusted. In Lough Corrib is the island of Innisduras, containing 29 acres and about 20 inhabitants. Near the glebe-house are the ruins of four druidical circles.