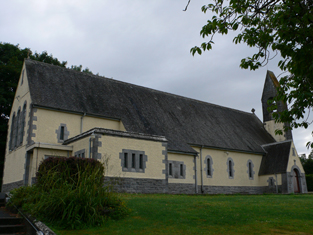 From A Topographical Dictionary of Ireland, by Samuel Lewis 1837

BELCLARE, or BELCLARE-TUAM, a parish, in the barony of CLARE, county of GALWAY, and province of CONNAUGHT, 3 ½ miles (S. S. W.) from Tuam, on the road to Headfort; containing 2371 inhabitants. A monastery of Franciscan friars was founded here in 1291, and at an early period had acquired very ample possessions, but little more of its history is recorded. The celebrated hill of Knockman, or Knockma, from which is an extensive and delightful view, is situated in the parish; and there are several extensive tracts of bog, and a flour-mill. The gentlemen’s seats are Thomastown, the residence of Capt. Kirwan, and New-Garden, of Roderick O’Connor, Esq. It is a vicarage, in the diocese of Tuam, and, with a portion of the rectory, forms part of the union of Tuam; the other portion of the rectory is appropriate to the deanery of Tuam. The tithes amount to £235, of which one-half is payable to the dean and the other to the incumbent. In the R. C. divisions it is the head of a union or district, called Clare-Tuam, comprising the parishes of Belclare, Kilmoylan, and Kilmacrean, and containing two chapels, situated respectively in Belclare and Kilmacrean; the former is a good slated building recently erected. A school for Protestant females is wholly supported by Mrs. Kirwan, of Castle Hackett; and there are two pay schools, situated respectively at Wood’s quay and Carabeg, in which are 148 boys and 21 girls.