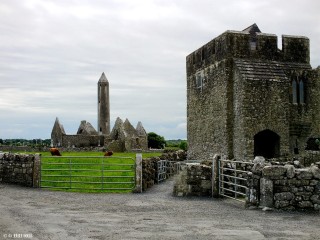 KILMACDUAGH, a parish, and the seat of a diocese, in the barony of KILTARTAN, county of GALWAY, and province of CONNAUGHT, at the junction of the roads from Ennis to Galway and Ballinasloe; containing, with part of the post-town of Gort, 3770 inhabitants. This see was founded by St. Colman, son of Duach, of the noble family of Hy Fiacrii of Connaught, distinguished from other Colmans, his cotemporaries, by the appellation of Mac Duach, and who, after seven years strict seclusion, about the year 620 fixed his residence at this place, where he built a monastery and church, called after him Killmac-Duach, whence the diocese has taken its name. It was amply endowed by Guair, then King of Connaught, and subsequently by his successors.

Mac Duach presided over the diocese till his death, and of his successors previously to the arrival of the English, the name of one only, Indrect, occurs, who died in 814. Maurice, bishop of this see, who died in 1283, erected on the site of the original foundation, at a short distance from the present cathedral church, a monastery for Augustinian canons, which subsisted till the Reformation, when it was granted to the Earl of Clanrickarde.

Stephen Kerovan, who was consecrated in 1573; was translated to the see of Clonfert in 1582, from which time this see remained vacant till 1587, when Roland Linch succeeded to the prelacy; and he being, in 1602, translated to the see of Clonfert, obtained permission to hold this diocese with it in commendam, since which period the two sees continued to be always held together, till the recent death of the Right Rev. Dr. Butson. when both were annexed to the see of Killaloe, and the temporalities vested in the Ecclesiastical Commissioners, under the provisions of the Church Temporalities Act of the 3rd and 4th of William IV. It is one of the six that constitute the Ecclesiastical province of Tuam, and is wholly within the county of Galway, comprising an estimated superficies of 64,000 acres. The lands belonging to the see comprise 3950 ½ statute acres, and the gross revenue, on an average of three years ending Dec. 31st, 1831, amounted to £875.

The Quarta Pars still prevails in this diocese, the bishop receiving one-fourth part of the tithes of every parish. The chapter consists of a dean, archdeacon, treasurer, precentor, and provost, with the two prebendaries of Kinvarra and Island-Eddy: there are neither minor canons nor vicars choral, and there is no economy fund. The total number of parishes in the diocese is 21, comprised in four unions or benefices, of which one is in the patronage of the Crown, one in that of the Marquess of Clanrickarde, one in that of the Bishop, and one in the alternate patronage of the Bishop and the Marquess of Clanrickarde. There are four churches, and one other building in which divine service is performed, and four glebe-houses. The cathedral, which is also the parish church, is a neat modern edifice, situated in the town of Gort.

In the R. C. divisions the diocese is united with that of Kilfenora, and comprises 11 parochial benefices or unions, containing 14 chapels, which are served by 15 clergymen, of whom 11 are parish priests and 4 coadjutors or curates. The parochial benefice of the bishop is Kinvarra, where he resides.

The parish comprises 6015 statute acres, of which about 600 are waste and exhausted bog, and the remainder in a tolerable state of cultivation; from the exhausted state of the bogs, fuel is scarce.

The living is a vicarage, episcopally united from time immemorial to the vicarage of Kilbeaconty and the rectory of Kiltarton, together constituting the union and corps of the deanery of Kilmacduagh, in the patronage of the Crown; the rectory is appropriate to the treasurership and precentorship of the cathedral church of St. Colman.

The R. C. parish is co-extensive with that of the Established Church, and has two chapels, one at Gort, a large slated building, and one of smaller dimensions at Taernevin, which is a plain thatched building. There are four private schools, in which are about 220 children. Some remains of the monastery built on the site of the ancient abbey founded by St. Colman yet exist to the north-west of the cathedral, and are situated on a neck of land between two loughs: they consist chiefly of the church, which, though small, appears to have been of very elegant design; to the south of the church is the sacristy, and adjoining it is an arched room in which probably were deposited the valuable effects belonging to the establishment, and to the south of these are the chapel and refectory. To the north, about two feet from the church, is an old wall, which, according to tradition, belonged to a place for penance; and near it is a holy well, with a circular enclosure. Near the site of the church is an ancient round tower, which declines about 17 feet from the perpendicular. In a lake in the parish, called Lough Deehan, the waters having sunk very low in the year 1784 or 1785, a house was discovered in the mud at the bottom, formed of oak timber of great thickness, the sides and roof of which were formed of wattle-work of the same substance; it appeared as if intended to float, and the timber of which it was constructed was perfectly sound.