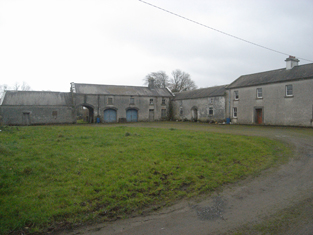 MONIVAE, or ABBERT, a market-town and parish, in the barony of TYAQUIN, county of GALWAY, and province of CONNAUGHT, 7 ½ miles (N.) from Craughwell, to which it has a penny post, on the road from Galway to Castle-Blakeney, and on the river Tyaquin; containing 5117 inhabitants.

The parish comprises 15,337 statute acres, as applotted under the tithe act: one-third of the land is good, the remainder being of indifferent quality; there are 1000 acres of waste, and 2500 of bog (on the estate of Tyaquin alone) all reclaimable. It is a constabulary police station, and petty sessions are held at irregular intervals. The market is held on Thursday; and fairs are held on May 12th and Oct. 12th.

The living is a perpetual curacy, in the diocese of Tuam, and in the patronage of the incumbent of Athenry: the income of the perpetual curate is £92. 6. 1 ½ ., derived from £60 paid by the rector of Athenry, and £32. 6. 1 ½. from the Ecclesiastical Commissioners. The church is a neat edifice, built in 1761, towards which the late Board of First Fruits gave £268.

In the R. C. divisions the parish is partly in the union or district of Athenry, and partly in that of Abbeyknockmoy; in each portion there is a chapel, one of which is on the Tyaquin estate. About 70 children are educated in the parochial school, which is aided by the perpetual curate; and about 100 in two private schools. A national school-house has just been completed; and here is a dispensary. In the demesne of Tyaquin are the ruins of an old castle; and an inscription on a stone in the old chapel purports that it covers the remains of Hobbert Burke, Earl of Ulster, Lord of Connaught, Viscount Galway and Baron Tyaquin. Here is a chalybeate spa, on the properties of which Dr. Macartney wrote a treatise.