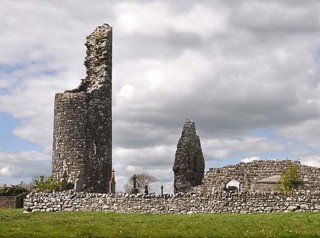 KILBENNAN, or KILBANNON, a parish, partly in the barony of CLARE, but chiefly in that of DUNMORE, county of GALWAY, and province of CONNAUGHT, 2 ½ miles (N. N. W.) from Tuam, on the road to Hollymount; containing 2561 inhabitants. A religious house was anciently established here, of which no other record exists but that it was granted, after the dissolution, to the burgesses of Athenry; it would appear to have been of great antiquity, as there is still remaining a portion, 50 feet high, of one of those ancient round towers found generally near the site of the earliest religious establishments. The parish is in the diocese of Tuam; the rectory is appropriate to the vicars choral of the cathedral of Tuam, and the vicarage forms part of the union of Tuam: the tithes amount to £106. 3. 1., which is equally divided between the vicars choral and the vicar. In the R. C. divisions it forms part of the union or district of Kilconly; the chapel is a small thatched building. There are two private schools, in which are about 170 children.