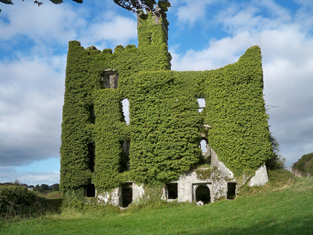 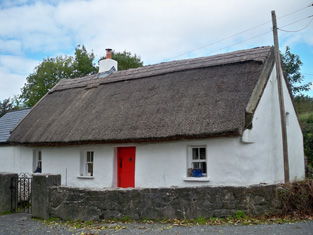 MENLOUGH, a village in the parish of Oranmore, barony and county of Galway, Connaught. It stands on the left bank of the Corrib river, amidst low, flat, morassy grounds, 2 ¼ miles north by west of the town of Galway. It is a wretched segregation of wretched cabins, -a specimen on a large scale, of the grouping of huts which constitutes a Connaught helmet. A quarry of black marble in its vicinity, annually produced, during several years ending in 1837, about 1,000 tons of marble, which was shipped at the port of Galway, and sold at from £7 to £8 per year ton in the markets of London and New York. A little south of village, and immediately overhanging the Corrib river, stands Monlough Castle, the plain but somewhat romantically situated residence of Sir Valentine Blake, Bart. Area of village, 53 acres. Pop., in 1841,  1,000. Houses 220. Families employed chiefly on property and professions, 0; on the directing of labour, 14; on their own manual labour, 203; on means not specified, 6.