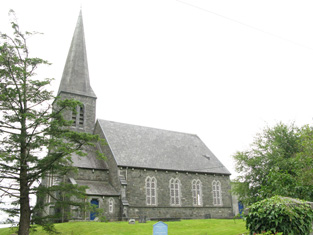 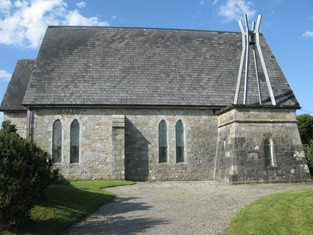 CLIFDEN, a sea-port, in the parish of Omey, barony of BALLYNAHINCH, county of GALWAY, and province of CONNAUGHT, 39 ½ miles (W. by N.) from Galway, and 144 miles (W.) from Dublin; containing 1257 inhabitants. It is situated on an eminence on the shore of a winding estuary that falls into Ardbear, or Clifden, harbour, on the Connemara or western coast; and is quite of modern origin, as it contained only one house in 1815, when John D’Arcy, Esq., settled here, principally through whose exertions 300 had been erected previously to 1835, including a commodious hotel for the accommodation of visitors; and although Clifden and a large tract of country did not yield 1s. of revenue in 1814, it yielded a revenue of £7000 in 1835. In that year also 800 tons of oats were exported to London and Liverpool, when, so recently as 1822, scarcely a stone of oats could be procured. It has a daily post to Galway. A chief constabulary police force is stationed in the town; and it is the residence of the inspecting commander of the Clifden district of coast-guard stations, which comprises Innislaken, Mannin bay, Claggan, and the Killeries. Markets are held in a neat market-house on Wednesday and Saturday; and fairs on June 25th, Sept. 1st, Oct. 15th, and Dec. 17th.

This is a quarter sessions town, and petty sessions are held every second Thursday. There is a bridewell, containing three day-rooms and several cells, with keepers’ apartments; and a handsome sessions-house is in course of erection. An elegant church and school have been erected, principally at Mr. D’Arcy’s expense; and there are a R. C. chapel, national school, dispensary, and fever hospital in the town. At a short distance, on the northern side of the town, is Clifden Castle, the delightful residence of John D’Arcy, Esq., the proprietor of the district, by whom it was erected. It is a castellated house standing on the verge of a fine lawn sloping down to the bay, and sheltered behind by woods and a range of mountain; the view to the right embraces a wide expanse of ocean. The pleasure grounds comprise about fifteen acres, and are adorned with a grotto of considerable extent, through which passes a stream, and with a shell-house or marine temple, composed of shells, spar, ore, &c.; though on the shore of the Atlantic, the trees and shrubs flourish luxuriantly. Two copper mines were worked here for a short period, and some coal has been found in the neighbourhood. Green and white marble are met with near Clifden Castle, of which the former has been worked, but not extensively.

The surrounding country is mountainous: much of it has been brought into cultivation by Mr. D’Arcy. It is generally a boggy soil, from three to four feet deep; sea sand has been principally employed in reclaiming the bog, which produces particularly fine oats, that have borne a higher price in London than any other in the market. In 1822, roads were commenced by Government from Oughterard to Clifden, from Galway to Clifden, and from Clifden to Westport, the completion of which and the formation of new ones in Connemara would prove highly beneficial to the district. There is a quay at Clifden, where vessels of 200 tons burden can lie, and part of the funds for the relief of the distressed Irish were expended in lengthening it. Corn and butter are shipped here for Liverpool, and large quantities of sea manure landed. This quay was commenced by Mr. Nimmo, in 1822, and its completion would be of great benefit, as it is the only place from which corn and fish are exported, and at which salt, iron, pitch, tar, hemp, timber, groceries, and manufactured goods, are imported.

There is a great quantity of fish on this coast, and vessels from the Skerries and other places often fish here. At the head of Ardbear harbour is a good salmon fishery, into which falls the mountain stream or river of Owen-Glan. The shores of the bay of Clifden, which is also called Ardbear, are high; the entrance to the harbour would be greatly benefited by the erection of a lighthouse on Caragrone rock. Mackenzie, in his chart of the western coast, lays this down as the safest and best harbour for large vessels: it is a rendezvous for vessels of war on this coast, which can ride in the greatest storms secure from all gales. Stores for salt and other necessaries for the fishery, or for ships in distress, have been erected near the harbour. Within a mile of the town are the remains of a druids’ altar; and at Clifden Castle is an excellent, chalybeate spring.—See Omey.