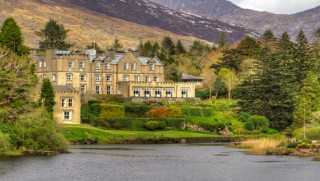 BALLINAHINCH, a lake, a rivulet, a village, and a demesne, in the barony just noticed, co. Galway, Connaught (…).  In the vicinity stands the village, -small and of little notice. But both it and the quay may possible  rise into notice in connection with the shipment of beautiful green marble, which is quarried in the Binnabola mountains, and which only waits to better known in order to its very probably finding distant and multitudinous markets. A road to Ballinahinch from Oughterard was, previous to 1813, one of two lines of road, which constituted the only means of internal communication in Cunnemara. Ballinahinch-house, the seat of Mr. Martin, who said to possess a greater number of acres than any other proprietor in Ireland, but whose landed property consists chiefly of the banks of the lake, and not very far from the village. The mansion is large and plain; the demesne around it could be worked into one of the most picturesque in the kingdom; and both house and grounds command magnificent views of the Binnabola mountains, the lake, the vale of the river, and the islet-studded bays of Roundstone and Birterbuy. On a platform of timber piles, interlaced with wood, stands picturesquely in the lake the ruin of an ancient castle.