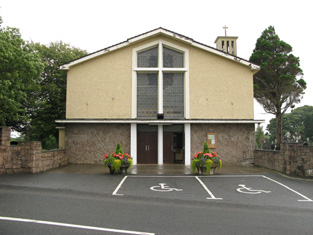 Church of the Immaculate Conception
National Inventory of Architectural Heritage

MOYCULLEN, a parish, in the barony of MOYCULLEN, county of GALWAY, and province of CONNAUGHT, 4 miles (N. W.) from Galway, on the road to Oughterard; containing 5965 inhabitants. This parish is bounded on the east by Lough Corrib, and comprises 27,294 statute acres, as applotted under the tithe act. The land is of very indifferent quality; and there is a large quantity of reclaimable waste and bog. In the village, which has a penny post to Galway, petty sessions are held on alternate Tuesdays; and fairs on Feb. 1st, May 28th, Sept. 2nd, and Dec. 8th.

The principal seats are Curcullen, that of M. P Browne, Esq.; Danesfield, of P. M. Burke, Esq.; Drimcong, of J. Kilkelly, Esq.; and Knockbane, of A. O’Flaherty, Esq.

In the R. C. divisions the parish is in the diocese of Galway, forming part of the union or district of Spiddal, and partly a district in itself: the chapel is a neat building. The late Rev. Francis Blake, P.P., left £500 for erecting a school-house, to which the Board of National Education added £200; a very good building has been erected, in which about 500 children are educated. Another school-house has been recently erected at the other end of this extensive parish, under the auspices of A. O’Flaherty, Esq. There is a private school, in which are about 60 children. A fine Danish fort at Danesfield gives name to the estate on which it stands: and there are ruins of two old castles, which have obtained celebrity from being selected by Lady Morgan as the scene of one of her novels: they may be seen from a great distance. Roderic O’Flaherty, a learned Irish historian and antiquary, was born here in 1630.