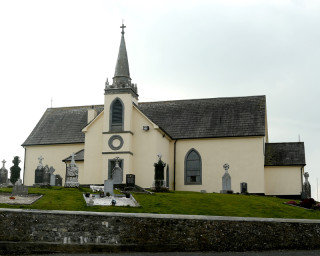 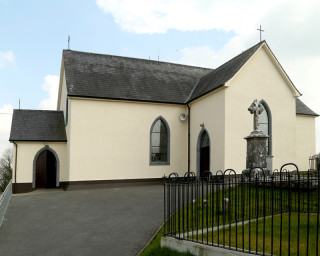 CLONTUSKERT, or CLONTHUSKERT, a parish, partly in the barony of Longford, but chiefly in that of Clonmacnoon, county of GALWAY, and province of CONNAUGHT, 5 miles (N. N. W.) from Eyrecourt, on the road to Ballinasloe; containing 4002 inhabitants, and comprising 11,837 statute acres. Boadan, or Broadan, founded a monastery here for Augustinian canons, in the early part of the 9th century, and was the first abbot; at the suppression it was granted to Richard, Earl of Clanricarde. Gurteemona is the seat of J. Blake, Esq. The living is a vicarage, in the diocese of Clonfert, and, with the greater portion of the rectory united, is part of the union of Clonfert: the other portion of the rectory is appropriate to the see: the tithes amount to £304. 12. 3 ¾., of which £46. 3. 1. is payable to the Ecclesiastical Commissioners, and £258. 9. 2 ¾. to the incumbent. The glebe-house was built in 1820, by aid of a gift of £250, and a loan of £450 from the same Board.

The church, which is at Glanlahan, is a very neat building, with a spire of hewn stone; it was erected in 1818, by aid of a gift of £900 from the late Board of First Fruits. The R. C. parish is co-extensive with that of the Established Church, and has a chapel. There is a school at Glanlahan, aided by annual donations from the Earl of Clancarty and the rector: and at Bonla is another school: together they instruct about 270 boys and 180 girls, besides whom, about 100 children are taught in three hedge schools. The ruins of the abbey are in good preservation: the gateway is still perfect, and the east window is very fine; and there are several ancient inscriptions, still very legible, the principal of which are those of the O’Kellys.