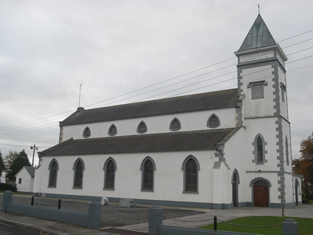 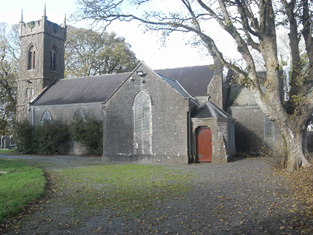 AHASCRAGH, a post-town and parish, partly in the baronies of KILCONNELL and KILLIAN, but chiefly in that of CLONMACNOON, county of GALWAY, and province of CONNAUGHT, 30 miles (E. N. E.) from Galway, and 78 miles (W.) from Dublin, on the road from Ballinasloe to Castlebar; containing 5205 inhabitants, of which number, 851 are in the town, which contains about 120 houses. It is situated in a fine corn country and there are some large oatmeal-mills. Fairs are held on Easter-Monday, Wednesday after Trinity, Aug. 25th, and Nov. 24th. Petty sessions are held fortnightly and here is a station of the constabulary police. The parish comprises 10,692 statute acres: there are quarries of excellent limestone, also a large tract of bog, which might be reclaimed. A branch of the Grand Canal approaches within six miles, and a drawback on the carriage of goods is allowed by the company. The principal seats are Castle Ffrench, the residence of Lord Ffrench; Weston, of the Very Rev. Jas. Mahon, Dean of Dromore; Crigane, of S. Masters, Esq.; and Castlegar, of Sir Ross Mahon, Bart. Part of the demesne of Clonbrock, the seat of Lord Clonbrock, is also within the parish. The living is a rectory, in the diocese of Elphin, and in the alternate patronage of the Crown and the Bishop: the tithes amount to £323. 1. 6 ½. The church is a neat building, erected at an expense of £1500. of which £1000 was granted on loan by the late Board of First Fruits, in 1814. The glebe-house was built in 1804, and the same Board gave £100 towards defraying the expense: the glebe comprises 24 acres. The R. C. parish is co-extensive with that of the Established Church: the chapel is a large building, with a burial-ground annexed. In addition to the parochial school, there is one for boys and girls, supported by Lord Clonbrock, by whom a few of the children are clothed; and a male and female school are also supported by Sir Ross Mahon. About 170 boys and 90 girls are instructed in these schools; and there are also five hedge schools, in which are about 200 boys and 70 girls.