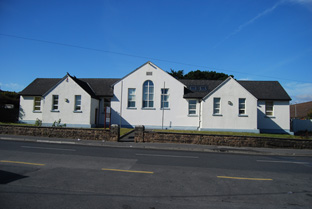 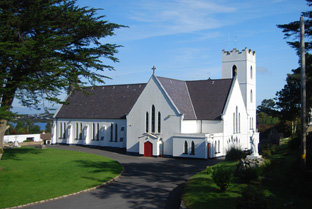 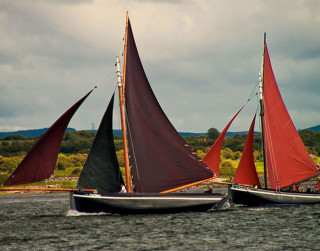 Carraroe (Irish: An Cheathrú Rua:  is a village in County Galway, Republic of Ireland. The name Carraroe is an anglicisation of the official Irish name, An Cheathrú Rua (“The Red Quarter”). There are 2,294 people living in the Carraroe ED and an estimated 83% are native Irish speakers.

The village is within the Irish-speaking region (Gaeltacht) of Connemara, and is famous for its traditional fishing boats known as Galway Hookers. Its population is widely dispersed over Carraroe peninsula between Greatman’s Bay (Cuan an Fhir Mhóir) and Casla Bay (Cuan Chasla). Carraroe has an unusual ‘coral’ beach, Trá an Dóilín, a biogenic gravel beach actually made of coralline algae known as “maerl“.

Galway Hookers are a distinctive form of native Irish boat, and Carraroe is today probably the single most important centre for these boats. Every August bank holiday, Carraroe hosts Féile an Dóilín, the largest Galway hooker festival in Ireland, and one of the largest maritime festivals in the country. Today the main activity of all these boats is racing, and there are numerous regattas along the Connemara coast. Among the most famous boats are An Mhaighdean Mhara (‘The Mermaid‘) and the Mac Duach. Currach racing is held on Loch an Mhuilinn, the lake close to the village. Every year at the festival of Cruinniú na mBád, a large flotilla of traditional Connemara boats race across Galway bay from Carraroe to Kinvara.

Féile an Dóilín is the west of Ireland’s premier maritime festival, taking place annually on the shores of Carraroe, Connemara (Carraroe).

Irish (specifically the Connacht dialect) is the main spoken language of Carraroe, the settlement being the most populous Irish speaking village in the Connemara Gaeltacht. It is one of the strongest Irish speaking areas in Ireland. There are two summer schools which teach Irish to English-speaking secondary-school students from all over Ireland. Students usually stay for three weeks with local families. Carraroe is also a centre for the Irish-language media. The main national Irish-language newspaper Foinse had its head office in the village; the Irish-language radio station, RTÉ Raidió na Gaeltachta, is in nearby Costelloe, and the Irish-language TV station, TG4, is based at Baile na hAbhann, a few kilometres east