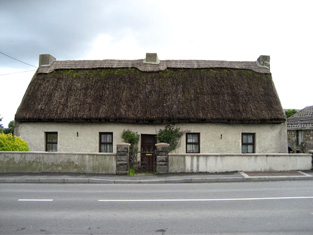 BARNA, a village, in the parish of RAHOON, county of the town of GALWAY, and province of CONNAUGHT, 3 miles (W.) from Galway: the population is returned with the parish. It is situated on the coast of Galway bay, and is chiefly noted for the quality of its butter, with which it supplies the town of Galway. A pier was originally built by a private individual in 1799, and rebuilt by Mr. Nimmo in 1822, but being only indifferently constructed, it was destroyed in 1830, and partially rebuilt in the following year by the officer of the coastguard and collector of Galway, with the aid of charitable funds at their disposal, and has been found very useful for the fishery; it is sheltered from the south and southwest gales, and is the only safety harbour for small craft in an extent of 27 miles of coast. Barna is the seat of Nicholas Lynch, Esq. Here are a constabulary police station and a coast-guard station, the latter forming one of the seven stations that constitute the district of Galway. The R. C. chapel for the parish, a small thatched building, is situated here.—See RAHOON