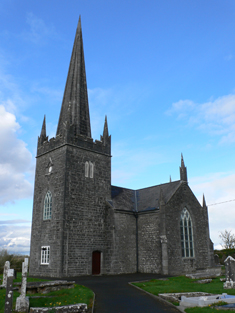 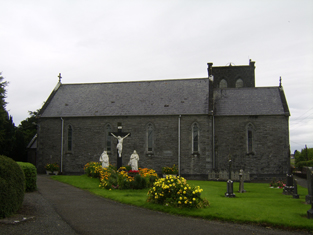 AUGHRIM, a post-town and parish, partly in the barony of CLONMACNOON, but chiefly in that of KILCONNELL, county of GALWAY, and province of CONNAUGHT, 29 miles (E.) from Galway, and 75 ½ miles (W. by S.) from Dublin; containing 2205 inhabitants, of which number, 587 are in the town. This place is celebrated for the memorable and decisive battle fought in its immediate vicinity on the 12th of July, 1691, between the forces of William III., consisting of 18,000 men under the command of Gen. de Ginkell, and the Irish army of James II., consisting of 25,000 men under General St. Ruth. Each general having taken up his position, of which that of St. Ruth, on Kilcommodon hill, was very strong, the action commenced at noon by a detachment from the English lines forcing, after a very sharp skirmish, the pass on the right of the Irish camp. About five o’clock the left wing of the English, both infantry and cavalry, advanced against the Irish; and after the engagement had continued more than an hour and a half with varied success, St. Ruth detached a considerable part of the cavalry of his left wing to the support of the right, which was severely pressed. Gen. Mackay, availing himself of this opportunity, and while the cavalry were forcing the pass of Aughrim castle, ordered several regiments of infantry to pass the bog and to wheel from the right to sustain them. Hurried on by their impetuosity, these regiments approached almost to the main body of the Irish army, and being encountered by the enemy’s horse and foot were, after a severe conflict, partly driven back to the bog; but Gen. Talmash, who commanded the English cavalry of the left wing, assisted by Gens. Mackay and Rouvigny from the right, advancing to their support, bore down all opposition, and enabled the infantry of the centre to rally and repossess themselves of their former ground. St. Ruth, seeing that the result of the battle depended on his making a powerful impression on the English cavalry, advanced against them with a body of the Irish cavalry, but being killed by a cannon ball, his whole army was thrown into confusion and retreated with precipitation. The pursuit was continued for three miles with the greatest activity; and the Irish lost 7000 men slain and 450 taken prisoners, besides their cannon, ammunition, and baggage; while, on the side of the English, only 700 were killed and 1000 wounded. Gen. de Ginkell, after his victory, remained here for a few days to refresh his forces.

The town, which is situated on the road from Ballinasloe to Galway, and contains about 100 houses, was anciently called Eachraim, or Aghrim O’Many, and was the site of a priory of Canons Regular of the order of St. Augustine, said to have been founded in the 13th century and dedicated to St. Catherine, by Theobald, first Butler of Ireland; the establishment continued to flourish till the dissolution, when it was given to Richard, Earl of Clanrickarde. The market has fallen into disuse: fairs are held on June 21st and Oct. 14th. The October fair is noted for the number of turkeys which are sold, in general not less than 20,000; they are smaller than those of other parts of Ireland. A constabulary police force is stationed in the town. The Grand Canal comes up to Ballinasloe, within three miles of it.

The parish comprises 6700 statute acres, as applotted under the tithe act: about half a mile from the town, on the Ballinasloe road, there is an extensive bog. The gentlemen’s seats are Aughrim Castle, the residence of R. Stanford, Esq.; Northbrook, of J. North, Esq.; Aughrim glebe, of the Rev. H, Martin; Eastwell, of J. Ussher, Esq.; Ballydonnellan, of A. Donnellan, Esq.; Castron, of Mrs. Lynch; Fahy, of Capt. Davys; Oat-field, of Major Lynch; Fairfield, of T. Wade, Esq.; Ballieghter, of P. Donnellan, Esq.; and Lissevahane, of F. K. Egan, Esq. The living is a vicarage, in the diocese of Clonfert, with part of the rectory united, and to which also the rectories and vicarages of Killaghton, Kilgerrill, and Killimore-daly were episcopally united in 1735, together constituting the union of Aughrim, which is in the patronage of the Bishop; the rectory is also partly appropriate to the see and partly to the deanery. The tithes amount to £147. 15. 9., of which £32. 8. 0 ¾. is payable to the Ecclesiastical Commissioners, £9. 4. 7 ½. to the dean, and £106. 3. 0 ¾. to the vicar; and the tithes for the whole benefice amount to £408. 9. 2 ½. The church is a neat edifice, erected by aid of a loan of £1500 from the late Board of First Fruits, in 1817. The glebe-house was built by aid of a gift of £400 and a loan of £340 from the same Board, in 1826: the glebe comprises 20a. 1r. 4p. In the R. G. divisions the parish forms part of the union or district of Kilconnell; the chapel here is a neat building. There are places of worship for Primitive and Wesleyan Methodists. The parochial school for boys and girls is aided by the vicar; and there are two other schools, in which about 120 children are educated. Some remains yet exist of the castle of Aughrim, which, about the time of the battle, was the residence of the family of O’Kelly. Swords, spear heads, and cannon balls, with numerous coins of James II., are frequently dug up. Aughrim gives the title of Viscount to the family of De Ginkell, descendants of Gen. De Ginkell, on whom it was conferred by William III., together with that of Earl of Athlone, March 4th, 1692, for his important services here and at Athlone, and to whom he subsequently granted all the forfeited estates of William Dongan, the attainted Earl of Limerick, comprising 26,480 acres of profitable land.