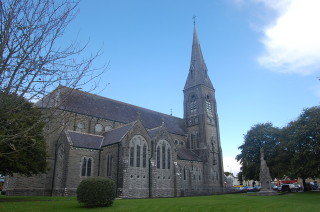 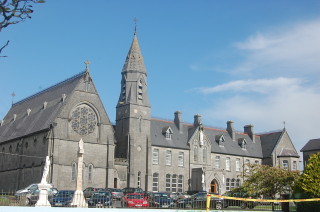 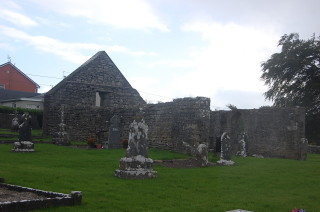 LOUGHREA, a market and post-town, and a parish, in the barony of LOUGHREA, county of GALWAY, and province of CONNAUGHT, 18 miles (E. by S.) from Galway, and 86 ½ (W. by S.) from Dublin; containing 7876 inhabitants, of which number, 6268 are in the town and suburbs. This place, which is situated on the shore of Lough Rea, was chiefly remarkable for its monastery, founded by Richard de Burgh, about the year 1300, for Carmelites or White friars; after the dissolution it was granted to Richard, Earl of Clanricarde, ancestor of the present proprietor.

A castle was erected here by the Earl of Ulster at an early period, and the town, from its situation in the approach to Galway, was deemed of so much importance that it was fortified. It at present consists of several streets, and contains 1229 houses, of which many are neat and well built. There is a promenade called the Mall, which is much frequented, and the neighbourhood abounds with pleasingly diversified scenery The lake, which is about one mile in diameter, has three small islands of picturesque appearance, and its shores are enlivened by some pleasing cottages, and embellished on the south and east with hills of beautiful verdure.

An extensive brewery has been erected on the side of the lake by Mr. L. Fahy. The market is on Thursday, and is well supplied with grain and provisions of every kind, and with poultry in abundance. Fairs are held on Feb. 11th, May 26th and 27th, Aug. 20th, and Dec. 5th; the May fair is numerously attended by purchasers for horses, cattle, sheep, and pigs, of which last great numbers are sold at all the fairs.

A chief constabulary police force is stationed in the town, which is also the head station of the central district of the revenue police, including those of Loughrea, Galway, Ballinasloe, and Athlone, and comprising a force of three lieutenants, three serjeants, and 58 privates, under the control of a resident sub-inspector. A manorial court is held before the seneschal; petty sessions are held every Thursday, and quarter sessions twice in the year before the assistant barrister for the county.

The parish comprises 5373 statute acres, as applotted under the tithe act; the soil is fertile and the system of agriculture improving; there is a moderate quantity of bog and scarcely any waste land; building stone is found and extensively quarried.

The living is a rectory and vicarage, in the diocese of Clonfert; the rectory is partly appropriate to the deanery, and partly to the vicarage, which latter is episcopally united to the vicarages of Kilteskill, Kilrickill, and Kilnadeema, and in the patronage of the Marquess of Clanricarde.

The R. C. parish is co-extensive with that of the Established Church, and is one of the parishes belonging to the Bishop; the chapel is a spacious edifice, and there are chapels also attached to the Carmelite monastery, and to the convent of sisters of the same order.

The Carmelite monastery, originally founded in 1300 by Richard de Burgh, Earl of Ulster, has, notwithstanding the alienation of its revenues at the dissolution, still preserved a regular succession of members. In consequence of the dilapidated state of the buildings, a chapel and a dwelling-house adjoining it were erected in 1785, of which the former was rebuilt on a more extensive scale in 1816, and the latter in 1829, under the superintendence of the prior, the Rev. Mr. Gannon, at an expense of £4000 (including both), defrayed partly from the funds of the establishment and partly by subscription, to which the Clanricarde family, on whose estate the monastery is situated, liberally contributed.

A convent for nuns of the same order was founded about the year 1680, and removed to its present site in 1829, when the building, including a chapel, was erected under the direction of the Prior of the abbey, at a cost of £5000, entirely defrayed from the funds of the nunnery; there are at present 18 sisters in the convent, chiefly young ladies.

Nearly 1000 children are taught in three public schools, of which the parochial school is supported by the rector, and the national schools are chiefly under the direction of the Prior and R. C. clergy of the monastery, and the sisters of the nunnery; the school-houses were built at the joint expense of the Prior, the nuns, and the New Board of Education. There are also seven private schools, in which are about 230 children, and a Sunday school. There are some remains of the ancient Carmelite monastery, and also of the old castle built by the De Burghs, which was for some time the residence of the Clanricarde family.

There was anciently an hospital for lepers in the town, but little of its history is recorded, and even the site of it is unknown. On the summit of Monument Hill, near the town, is a circular enclosure in which are seven stones, five still standing erect, and two lying on the ground; in the centre is a small tumulus of earth, and near the base of the hill are vestiges of a circular intrenchment, within which are the remains of an ancient cromlech.