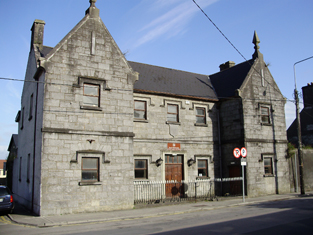 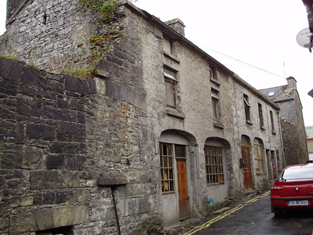 GORT, a market and post-town, partly in the parishes of KILTARTAN and BEAGH, but chiefly in that of KILMACDUAGH, barony of KILTARTAN, county of GALWAY, and province of CONNAUGHT, 17 miles (S. S. E.) from Galway, and 98 ½ (W. by S.) from Dublin, on the road from Galway to Ennis; containing 3627 inhabitants. This town consists of 563 houses, most of which are neat stone buildings, three or four stories high, held under perpetual leases from Viscount Gort. It is built on an eminence on the main road from Connaught to Munster, with a large square in the centre, and is in a very healthy situation on the bank of a river, which works a very large flour-mill built in 1806, and enlarged in 1836, the property of J. Mangan, Esq., in which 7000 barrels of flour may be annually made. There is a market on Saturday, for agricultural produce, at which much business is transacted; and fairs for cattle and sheep are held on May 10th, Aug. 11th, and Nov. 7th; there is also a very large pig fair on March 17th and on the Saturday preceding Easter-Sunday. The roads in the vicinity are kept in excellent order. Two mail coaches come into the town; one from Dublin, which arrives at 10 A. M. and returns at 4 P. M.; the other passes through daily from Galway to Limerick, and from Limerick to Galway.

Here are an hotel, a revenue police and a chief constabulary police station, which has dependent stations at Ardrahan, Ballytiven, Granagh, Maryville, Noggira, Normongrove, Tubber, Tiernevan, and Killafin. Petty sessions are held every Saturday, and the October quarter sessions for the county are held in the court-house, which was erected in the square in 1815, and comprises a court-hall, grand and petty jury rooms, and keepers’ rooms. Here is also a bridewell, built in 1814, and containing two cells, a magistrates’ room, and keepers’ apartments; but being now too small, is about to be rebuilt. Barracks have existed at Gort for a very long period, and £7000 have been lately expended in building houses for officers and store-rooms; they will now accommodate 8 officers, 88 men, and 116 horses. The church, which is the parish church of Kilmacduagh, was erected in 1810, by a loan of £1400 from the late Board of First Fruits, on land given by the first Lord Gort. It is an elegant cruciform building with a conical spire, and was repaired by a loan of £600 from the same Board, in 1828: the interior is handsomely fitted up with galleries and pews. A new street will be opened from Bridge-street to the church, from which a fine view of it will be obtained. The R. C. chapel was built in 1825, on a site given by Lord Gort, and at an expense of £1300, defrayed by subscription: it is a substantial cruciform building, and contains a fine paintng of the Holy Trinity, presented by Lord Gort. The infirmary, which has been recently built, contains two wards, a keeper’s room, and a surgery.

The scenery in the vicinity of the town is very beautiful, comprising on the west the Burren mountains in the county of Clare, and on the east the Derrybrien, Castle Daly, and Roxborough mountains. The chief seat is Loughcooter Castle, the residence of Viscount Gort, proprietor of the town, from which he takes his title. It is a noble castellated building, erected at an immense expense, in a well-planted demesne abounding with game, by the present peer, from designs by Mr. Nash, and commanding very fine woodland, lake, and mountain views. In front of the castle is Lough Cooter, a beautiful lake three miles long, containing seven well-wooded islands, and abundance of pike, trout, perch, and eels. Besides this magnificent residence, there are many other seats near the town, which are enumerated in the articles on the surrounding parishes. In its vicinity is a river that has a subterraneous course for a considerable distance: it rises in Lough Cooter, passes through a deep ravine till it reaches “the Ladle,” a precipitous hollow clothed to the water’s edge with large trees, where it sinks under a perpendicular rock. About 100 yards from this spot it re-appears in “the Punch-bowl,” a circular basin about thirty yards in diameter and at least fifty deep: a pathway leads down the sides of this pit, which are very steep and clothed with trees. After flowing about 300 yards from the Punch-bowl it emerges, takes the name of the Black-water, and after running rapidly for a short distance again disappears. At the “Beggarman’s Hole,” a smaller circular basin than the Punch-bowl, it is again visible, and soon afterwards enters the “Churn,” which is like an extremely deep well, ten feet in diameter. A quarter of a mile from the Churn it re-appears from under a beautiful arch formed by nature in the rock, passes through the town, and about a mile from it sinks again, and after alternately appearing and disappearing, once more flows by a subterraneous channel into the bay of Kinvarra.