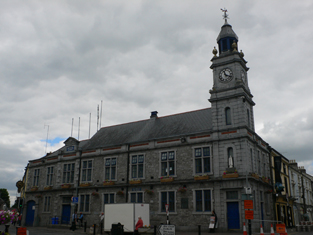 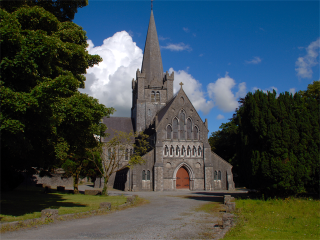 A Topographical Dictionary of Ireland,  by Samuel Lewis,  1837

“Tuam, an incorporated market and post-town (formerly a parliamentary borough), a parish, and the seat of an archdiocese, partly in the barony of DUNMORE, but chiefly in that of CLARE, county of GALWAY, and province of CONNAUGHT, 16 miles (N. W.) from Galway, and 98 ¾ (W. by N.) from Dublin, at the junction of the mail coach roads from Ballinasloe, Dunmore, and Hollymount, to Galway and Roscommon; containing 14,367 inhabitants, of which number, 6883 are in the town. This place, called anciently Tuaim-da-Gualand, owes its origin to the foundation of a religious establishment, about the beginning of the 6th century, by St. Jarlath, son of Loga, who for some time lived in seclusion in the small monastery of Cluainfois, which he had previously founded.

The church of Tuam was soon afterwards made the cathedral of a diocese, of which St. Jarlath became the first bishop, and was called Teampul-Jarlath, in honour of its founder, to whom it was subsequently dedicated. St. Jarlath is supposed to have died in 540, and long after his death his bones were discovered and deposited in a silver shrine, which was placed in a church or chapel called Temple-ne-Scrin, or “the Church of the Shrine.” Prior to the year 1150, Tirdelvac O’Conor, King of Ireland, founded a priory for Augustinian Canons, which he dedicated to St. John the Baptist; and in 1161 Roderic O’Conor, then King, erected a strong castle of stone here, which obtained the appellation of “the wonderful castle.”

The town was soon after destroyed by an accidental fire, but was soon restored, as in 1172 a great synod was convened here by Bishop Catholicus O’Dubhai, at which three churches were consecrated. An abbey for Premonstratensian canons was founded here either in the reign of John or early in that of Henry III., by one of the family of de Burgo, and dedicated to the Holy Trinity. In 1244 the town, with all its churches, was destroyed by fire. In 1252, when Henry III. confirmed to Florence Mac Flin the Pope’s bull for annexing the bishoprick of Enaghdune to the see of Tuam, it was on condition that he should have a portion of land within the town for the erection of a castle, in exchange for other land of equal value. The same king by letters patent granted to the archbishop a fair on the 28th of December and the seven following days. In 1356, the place was plundered and burnt by Charles Oge, son of William de Burgo.

The town, which is situated in a flat and rather low but healthy tract of land, consists of several spacious and some smaller streets, containing 1197 houses, most of which are neatly built and several are large and of handsome appearance: it is amply supplied with water by a copious and limpid stream, which in its course turns several mills. The principal sources of recreation are a reading-room over the market-house, and a public billiard table; a newspaper is published here; races are held annually about the 1st of September on an excellent course about a mile from the town, called Gurrans Turlogh, which is in winter overflowed with water, forming a considerable lake; an unsuccessful attempt was made some years since to drain it. The grounds of the archbishop’s palace are tastefully laid out, and the gardens are spacious and kept in excellent order: the mansion, though not possessing much architectural embellishment, is large and handsomely built; and around the demesne is a walk, a mile in length, thickly planted with trees and furnished with seats, affording a pleasant promenade to the people of the town. The house of the R. C. archbishop also adds much to the appearance of the town.

The ancient market cross, of richly sculptured stone, was a great ornament: it was erected by Turlogh O’Conor, but has been suffered to fall into decay; part of the base is still to be seen in the old meat market, and two other parts in the churchyard, of which that part of the shaft forming the cross is erected at the head of the tomb of Dr. Singe, one of the Protestant archbishops. The trade of the town, which is at present next in importance to Galway, is very considerable: it is principally for the supply of the surrounding districts. A constant intercourse with Dublin is maintained, from which the shopkeepers obtain the various articles for their home trade.

There are two good inns, at which the mails and other coaches stop. An extensive brewery, belonging to Mr. Blake, produces from 4000 to 5000 barrels of malt liquor annually; attached to it are a malting concern, making about 600 quarters of malt, and some flour-mills, carried on by the sons of that gentleman: there is also a tannery, and the manufacture of coarse linens is extensive. The markets, on Wednesday and Saturday, are abundantly supplied with provisions of all kinds, and with fish from Galway and Ballina; fairs are held on May 10th, July 4th, Oct. 20th, and Dec. 15th. The market-house is a neat building, nearly in the centre of the town.

The inhabitants received their first charter from James I., who in the 11th of his reign incorporated them under the designation of “the Sovereign, Free Burgesses, and Commonalty of the Borough of Tuam.” By this charter the corporation consists of a sovereign, twelve free burgesses, and an indefinite number of freemen, assisted by a recorder, treasurer, town-clerk, two serjeants-at-mace, and other officers. The sovereign, who is judge of the borough court and clerk of the market, is chosen annually from the free burgesses by a majority of that body, on the festival of St. John, and is sworn into office on that of St. Michael; the free burgesses fill up vacancies as they occur, by a majority of their body, by whom also freemen are admitted, and the officers of the corporation appointed. The charter conferred upon the corporation the privilege of returning two members to the Irish parliament, which they continued to exercise till the Union, when the borough was disfranchised.

The borough court of record had jurisdiction to the amount of five marks, but since 1826 few proceedings have issued from it, and within the last few years it has been altogether discontinued. The general sessions of the peace are held here twice in the year, and petty sessions every Wednesday; a chief constabulary police force is stationed in the town. The court-house is a neat and well-arranged building: annexed to it is a small bridewell, containing two day-rootns and airing-yards, and eight cells”.