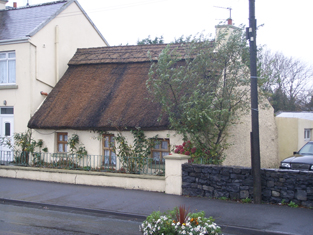 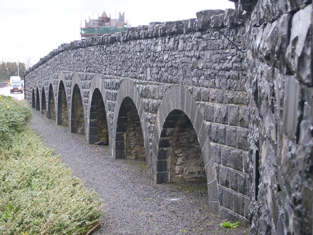 CLARE-GALWAY, a parish, partly in the barony of CLARE, and partly in that of DUNKELLIN, county of GALWAY, and province of CONNAUGHT, 5 miles (N. E.) from Galway; containing 3588 inhabitants. This parish is situated on the river Clare, about four miles from its influx into Lough Corrib, and comprises 10,025 statute acres, as applotted under the tithe act. A monastery for Franciscan friars was founded at Clare-Yndowl about the year 1290, by John de Cogan, who erected the buildings in a very elegant style and at a great expense. During the vacancy of the see of Enachdune, the pontificalia were deposited in this monastery till the appointment of a bishop; but were forcibly carried off, in 1296, by Philip de Blund, archdeacon of Tuam, by order of the Archbishop, who was desirous of annexing the see of Enachdune to that of Tuam. The monastery was further endowed, in 1368, by Thomas, Lord Athenry, and subsisted till the dissolution, when, with other possessions, it was granted to Richard, Earl of Clanricarde. The ruins are highly interesting, and give an adequate idea of the original extent and character of the building. The tower of the church still remains; it is supported on a pointed arch of beautiful symmetry, and, being close to the road from Galway to Tuam, is an object of great attraction to travellers. A portion of the ruins has been converted into a residence for Franciscan friars, and a small chapel has been built adjoining it, forming a strong contrast with the elegant grandeur of the ancient monastery.

The river Clare is navigable for boats to Lough Corrib during the winter, and at a moderate expense might be rendered so at all seasons. A penny post to Galway and Tuam has been established. A castle was erected here by one of the family of De Burgo; it was strongly garrisoned by the Earl of Clanricarde on the breaking out of the war of 1641, and in 1643 was seized for the Irish by Capt. Burke, but was retaken by Sir Charles Coote in 1651. The remains, which are in good preservation, prove it to have been a fortress of great strength. The living is a vicarage, in the diocese of Tuam, and in the patronage of the Archbishop; the rectory is appropriate to the Warden of Galway: the tithes amount to £240. There is neither church, glebe-house, nor glebe. The R. C. parish is co-extensive with that of the Established Church: the chapel is a small slated building. There are two pay schools, situated respectively at Clare-Galway and Clash, in which are about 80 boys and 50 girls.