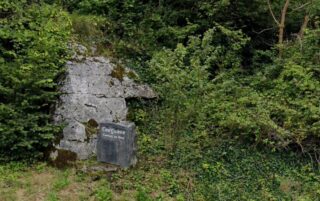 The Down Survey:  The Down Survey of Ireland carried out by William Petty an English scientist in 1655 and 1656 is the first ever detailed land survey on a national scale anywhere in the world. The Down Survey is a cadastral survey of Ireland and was so called simply by its topographic details being all laid down by admeasurement on maps. The survey sought to define legal property boundaries and measure all the land to be forfeited by the Catholic Irish in order to facilitate its redistribution to merchant adventurers and English officers and soldiers in Oliver Cromwell’s army. It was to repay them and the many English politicians and adventurers who had funded Cromwell’s military campaign in Ireland.

The Down Survey name for this townland was Creglosky.  In 1641 (pre-Cromwell) the owner was Andrew Lynch catholic.  In 1670 (post Cromwell) it remained in catholic ownership of John Lynch.  The townland is in County Mayo, in the barony of Kilmaine and in the parish of Conge.  There were 84 plantation acres of profitable land, and this amount was forfeited.

O’Donovan’s Field Name Books 1838:  The standard name for the townland is Cregaree and the Irish form of the name is Creag a Righ that translates as the King’s Rock.  John O’Donovan tells us there were many forms of the name for Cregaree; Creggaree, Creag a Righ, Creg (Boundary Surveyors Sketch Map), Creg (County Cess Collector), Cregaree or Royal Rock (Local), Cregg (Mearsman) and Creg (Rev. Michael Waldron P.P.).

Description:  The proprietor was Sir Richard O’Donnell, Newport, Co. Mayo.  The agents were Alexander Clandenning Esq. Westport and Alex Lambert, Esq. Ballinrobe.  The land was held under lease by Mr. John Thompson of Cong.  The soil was all rocky.  Cong road runs through the townland and all a sheet of rock except the parts near the road.  The County Cess of 11¼ d paid per acre for 26 acres.  Flour Mills and Mill house stand on this townland.  The mill house is the residence of Mr. John Thompson and there is a rent of £55.7.8. for the mill and land.  There are no antiquities.

Situation:  Cregaree is in the east side of the parish.  It is bounded on the north, east and south by the parish of Cong, Co. Mayo and on the west by the townlands of Ashford, Clogher and Cloonamorriv.  It is in the barony of Ross Co. Galway.

Griffith’s Valuation1849:  According to Griffith’s valuation, Creggaree (Ordnance Survey Sheet 27) comprised of 90 acres and 27 perches. The land value at the time was £18.19.6., while the building value was £36. Alexander Lambert the immediate lessor was in fee and the land consisted of 57 acres, 1 rood and 15 perches.  (Lands held in fee were freehold tenures, derived from a grant from the Crown and constituted absolute ownership). James Faire also collected rents from occupiers of properties in this townland.

Plot 1 A B:  Alexander Lambert held lands in fee that had an area of 57 acres, 1 rood and 15 perches and had a ratable annual valuation of £6 and 15 shillings.

3:  Charles Malley had land with an area of 5 acres and 27 perches.  The land had an annual valuation of £1 and 15 shillings, that was payable to Alexander Lambert.

3(a):  Charles Malley had houses, mill, stores and garden leased from James W. Faire.  The garden measured 2 roods and 20 perches; this had an annual valuation of 10 shillings.  The buildings were valued at £70 and 10 shillings.  His total annual rent payable to James W. Faire was £80.

3(b):  Rev. Michael Waldron leased a national schoolhouse that had an annual valuation of £2 and 10 shillings.

3(c):  Thomas Flynn had a house and garden.  The garden measured 10 perches; it had an annual valuation of 2 shillings; the house was valued at 8 shillings.  Thomas’s total annual rent was 10 shillings.

Plot 5:  Thomas Flynn had 8 acres and 30 perches of land that had an annual valuation of £2.

Census 1901:  Constable Richard Kelly the enumerator collected the census for Cregaree on the 2nd April 1901. There were eight dwellings; one was 2nd class, four were 3rd class and three were 4th class, all with perishable roofs that were most likely made of thatch.  Cregaree had a population of twenty seven; eleven males and sixteen females. All were born in Co. Mayo and were Roman Catholic.   It is a limestone area and stone cutting was an occupation for many families.  Two widows were cottiers (a cottier was a landless person, or one cultivating a small holding of less than five acres; the rent was usually off set against days working on the owners’ land for free).

No 1:  John Morrin (60), his wife Mary (60) and their son Patrick (22) lived in this house.  John and his son were stone cutters and they could read and write. Mary could not read or write.   John filled and signed the census form. The family spoke Irish and English. The house was 3rd class with two windows to the front and three people occupied two rooms.  There was a piggery and a shed on the property.

No 2:  Michael Morrin (70) and his wife Mary (58), their son Michael (28), their daughters Bridget (26) and Margaret (22) and their grandson Patrick Hastings (18) lived here.  Michael and his son were stone cutters; his wife, his daughters and his grandson were listed as ‘assistant’ (I presume they were assisting the stone cutters).  The parents and their son could not read or write; their daughters and their grandson could read and write, and all were bilingual.  The house was 3rd class with two windows in front and the family of six people occupied two rooms.  There was a piggery and a shed on the holding.

No 3:  Peter Waldron (65) a farmer was married to Bridget (50).  Their sons were Michael (24) a farmer’s son, Peter J (18) a post boy and Edward (13) a scholar.  Their daughters Bridget (15) and Rosie (6) were scholars.  Peter’s mother-in-law Honora Hopkins (74) a widow, and his cousin Bridget Varley (30) a cook were also listed in this house.  Honora, Bridget the cook and Rosie could not read; the rest of the family could read and write and all were bilingual.  The house was 2nd class with four windows in front and nine people occupied six rooms.  Six outbuildings contained a stable, a cow house, a piggery, a fowl house, a barn and a shed.

No 4:  Honoria Curry (60) a widow was a cottier.  Honoria (sic) was bilingual but could not read.  The house was 3rd class with one window to the front and Honoria occupied one room.   There were no outbuildings on the holding.

No 5:  Bridget Curry (60) a widow was head of this household.  Her son Thomas (28) was an agricultural laborer and her daughter Norah (21) a general domestic servant.  They spoke Irish and English; none could read or write.  The house was 3rd class with one window in front and three people occupied two rooms.  There was a piggery and a shed on the premises.

No 6:  Margaret Casey (76) a widow was a cottier.  Margaret was bilingual but could not read.  The house was 4th class with one room.  There were no outbuildings on the holding.

No 7:  Mary O’Brien (42) a single woman was a cottier.  Mary spoke Irish and English but could not read.  The house was 4th class and Mary occupied one room.  There were no outbuildings on the holding.

No 8:  John Walsh (80) a widower was a stone breaker.  His daughter Mary Gilmor (sic) (45) a widow and Mary’s daughter Catherine (8) lived here with him.  Mary’s occupation was listed as Washer Woman.  The family was bilingual; none could read.  The house was 4th class, and three people occupied one room.  There were no outbuildings on the holding.

Census 1911:  Constable John Gallagher collected the census for Cregaree on the 8th April 1911.  There were four houses in the townland, one was uninhabited.  Two were 2nd class dwellings; one was 3rd class, all had perishable roofs that were most likely thatch. Thirteen people lived here at the time: five males and eight females.  All were born in Co. Mayo and were Roman Catholic.

Ten years on, the census was expanded to include the following: Particulars as to Marriage / completed years the present marriage has lasted / children born alive to present marriage and children still living.  It reveals that many families experienced the loss of one or more children.  Overcrowding and lack of facilities must have presented huge struggles.

No 1:  Michael Morrin (86) a farmer and his wife Mary (75) were married for fifty years.  Nine children were born to the couple but only five were still living. Their daughters Bridget (38) and Maggie (29) were single and did not have an occupation listed.  Patrick Varley (31) a farmer was married to their daughter Kate (34) and they lived with the couple

Michael and his wife could not read while the rest of the household could read and write, and all were bilingual.  The house was 2nd class with three windows in front and six people occupied three rooms.  They had two outbuildings; a cow house and a piggery.

No 2:  John Morrin (73) a widower was a farmer.  He could read and write, and he spoke Irish and English.  The house was 3rd class with two windows in front and John had four rooms.  There were no outbuildings on the premises.

No 3:  Peter Waldron (75) a farmer was married to Bridget (59) for forty years and they had twelve children, eight were still living. Their son Peter (28) and their daughter Bridget (24) had no occupation listed and Rose (16) was a scholar.  Peter senior’s mother-in-law Honoria Hopkins (82) a widow lived with the family. The parents and children could read and write while Honoria could not read.  All spoke Irish and English.  The house was 2nd class with three windows to the front and six people occupied four rooms.  They had a cow house on the holding.