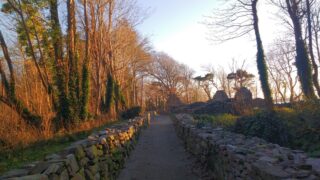 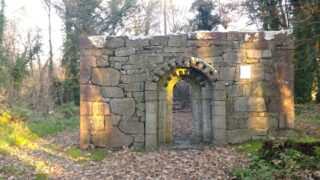 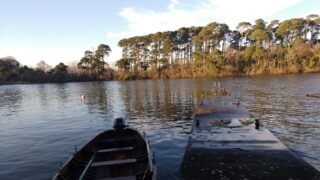 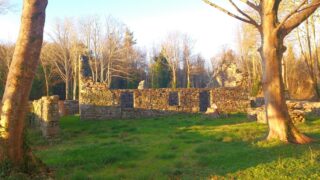 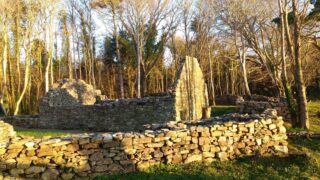 Translation:The Island of the Foreigners

The Down Survey of Ireland is the first ever detailed land survey on a national scale anywhere in the world.  The survey is a cadastral survey of Ireland carried out by William Petty an English scientist in 1655 and 1656.   The survey sought to measure all the land to be forfeited by the Catholic Irish in order to facilitate its redistribution to merchant adventurers and English officers and soldiers in Oliver Cromwell’s army. It was to repay them and the many English politicians and adventurers who had funded Cromwell’s military campaign in Ireland.

The Down Survey reveals the name for the island was Inishgeele (Lough Corrib).  The owner in 1641 (pre-Cromwell) was Sir Robert Cressey a protestant.  In 1670 (post Cromwell) it remained in protestant ownership of Taseborough Cressey. The townland of Inchagoill is in the half barony of Ross, in the parish of Conge (sic) County Galway. It contained 60 plantation acres of profitable land and this amount was forfeited.

O’Donovan’s Field Name Books (1838):  O Donovan tells us the standard name for the island was Inchagoill and the Irish form of the name was Inis Goill that translates as the island of the foreigners.

Description:  Inchagoill is an island in Lough Corrib and is situated in the townland of Dooris

To this part of the parish of Cong also belongs the island of Incha Goill; situated in Lough Corrib about midway between Lemonfield and Cong.  It is described by O’Flaherty thus in his account of the Seigniory of his ancestors; Inis an Ghoill, so called from a certain holy person who lived there of old, known only by the name of ‘An Gall Craibhtheach’, i.e ‘The Devout Foreigner’, or Gall  originally meaning one of the Gallic nations, they call any foreigner (John O’Donovan).

The islands of Illaunagowna, Cleenillaun, Inishannagh, Burr, Inchagoill and illaundaular (in Lough Corrib) can be found on Ordnance Survey Sheet 40.  All were in the proprietorship of Alexander Lambert and he held the lands in fee.

There was also another small island in Lough Corrib belonging to Alexander Lambert with an area of 3 roods and 19 perches that was of no agricultural value.

The census return for Inchagoill in the electoral division of Cong and the sub – district of Cornamona Hut was enumerated by Constable William Ruane (56508) on the 9th April 1901.  There were three homesteads on the island; two 2nd class, one 3rd class, all with perishable roofs that were presumably thatch.  Seventeen people inhabited the island: ten males and seven females.  All were born in Co. Galway and were Roman Catholic.  Farming, herding, boatbuilding and boats man were their occupations.

No 1:  Mary Kineavy (sic) (60) a widow was head of this household.  Her three sons, her daughter, her daughter in law and her grandson were living with her.   Martin (30) a boat builder, was married to Kate (25) and they had a son Mathias who was (1) year old. William (22) was a farmer’s son; Bridget (16) a farmer’s daughter and Mathias (17) was a boat builder. Mary could not read; the young couple could read only, William, Mathias and Bridget could read and write. The family was bilingual.  The house was 2nd class with three windows to the front and seven people occupied three rooms.  Five outbuildings contained a cow house, a piggery, a fowl house, a workshop and a shed.

No 2:  Michael Keneavy (61) and his wife Julia (64) were farmers and they had three sons; John (36), Martin (26) and James (18).  Their son John, a boat man, was married to Bridget (29) and the couple had an infant son Michael who was (7) months old. Martin and James were farmer’s sons.  Michael could not read; his wife could read; their sons and their daughter in law could read and write and all spoke Irish and English.  The house was 2nd class with three windows in front and the family of seven occupied three rooms.  They had a cow house, a piggery and a barn on the holding.

No 3:  Michael Holian (sic) (64) a herd, was married to Bridget (50) and they had a daughter Bridget who was (7) years old.  The parents and their daughter were bilingual but could not read.  The house was 3rd class with two windows to the front and three people occupied two rooms.  They had a cow house on the property.  Lord Ardilaun, Clontarf, Co. Dublin was the name of the landholder where this house was situated.

Constable Thomas Fallon collected the census return for Inchagoill on the 26th April 1911.   Sixteen people lived on the island: eleven males and five females.  All three houses were now 2nd class dwellings with perishable roofs.  Each family had a piggery on their holding.

Ten years on, the census was expanded to include the following: Particulars as to Marriage / completed years the present marriage has lasted / children born alive to present marriage and children still living.  It revealed that many families experienced the loss of one or more children.

No 1:  Patrick Heffernan (39) a herd and his wife Maggie (35) lived in this house.  They were married for two years and did not have children at this time.  Patrick and Maggie spoke Irish and English; Patrick could not read; Maggie could read and write.  The house was 2nd class with three windows in front and the couple had three rooms.  There were now four outbuildings on the property: a cow house, a piggery, a fowl house and a shed. Lord Ardilaun remained the landholder where this house was situated.

No 2:  Michael Keneavey (sic) (74) a farmer and his wife Julia (75) were married for fifty years.  The couple had eleven children; five were still living.  James (28) was recorded in the 1911 census return. Michael’s daughter in law Bridget Keneavy (40) a widow and his grandchildren; Martin Keneavy (7) and Thomas Keneavy (5) were also in this house. The family spoke Irish and English; Julia and her son could read and write.  The house was 2nd class with three windows to the front and the family of six occupied three rooms.  They had a cow house and a piggery on the premises.

No 3:  Martin Keneavey (44) was married to Katie (39) for twelve years and they had six children; five were still living.  Mathias Francis (11) and Edward Fredrick (10) were scholars, John Joseph was (9), Patrick (4) and Martin Ambrose (2) years old.  Martin’s widowed mother Mary (74) was listed here.  Martin was a boat builder and farmer. Martin, Katie, the scholars and Mary could read and write.  The family was bilingual except for the two youngest who spoke English only.  This may indicate that English was the language of the home.  Martin filled and signed his census return.  The house was 2nd class; it had three windows in front and the family of eight occupied three rooms.  Five outbuildings on the property contained a cow house, a piggery, a fowl house, a workshop and a shed.